Dispersal and Integration in Female Chimpanzees 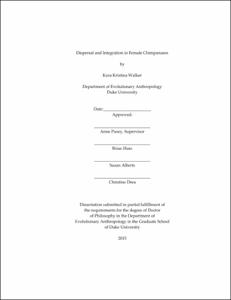 In chimpanzees, most females disperse from the community in which they were born to reproduce in a new community, thereby eliminating the risk of inbreeding with close kin. However, across sites, some females breed in their natal community, raising questions about the flexibility of dispersal, the costs and benefits of different strategies and the mitigation of costs associated with dispersal and integration. In this dissertation I address these questions by combining long-term behavioral data and recent field observations on maturing and young adult females in Gombe National Park with an experimental manipulation of relationship formation in captive apes in the Congo.

To assess the risk of inbreeding for females who do and do not disperse, 129 chimpanzees were genotyped and relatedness between each dyad was calculated. Natal females were more closely related to adult community males than were immigrant females. By examining the parentage of 58 surviving offspring, I found that natal females were not more related to the sires of their offspring than were immigrant females, despite three instances of close inbreeding. The sires of all offspring were less related to the mothers than non-sires regardless of the mother’s residence status. These results suggest that chimpanzees are capable of detecting relatedness and that, even when remaining natal, females can largely avoid, though not eliminate, inbreeding.

Natural observations show that apes use grooming and play as social currency, but no experimental manipulations have been carried out to measure the effects of these behaviors on relationship formation, an essential component of integration. Thirty chimpanzees and 25 bonobos were given a choice between an unfamiliar human who had recently groomed or played with them over one who did not. Both species showed a preference for the human that had interacted with them, though the effect was driven by males. These results support the idea that grooming and play act as social currency in great apes that can rapidly shape social relationships between unfamiliar individuals. Further investigation is needed to elucidate the use of social currency in female apes.

I conclude that dispersal in female chimpanzees is flexible and the balance of costs and benefits varies for each individual. Females likely take into account social cues present at maturity and their own phenotype in choosing a settlement path and are especially sensitive to the presence of maternal male kin. The primary cost associated with philopatry is inbreeding risk and the primary cost associated with dispersal is delay in the age at first birth, presumably resulting from intense social competition. Finally, apes may strategically make use of affiliative behavior in pursuing particular relationships, something that should be useful in the integration process.