Poverty and Place in the Context of the American South 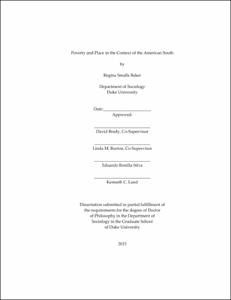 In the United States, poverty has been historically higher and disproportionately concentrated in the American South. Despite this fact, much of the conventional poverty literature in the United States has focused on urban poverty in cities, particularly in the Northeast and Midwest. Relatively less American poverty research has focused on the enduring economic distress in the South, which Wimberley (2008:899) calls “a neglected regional crisis of historic and contemporary urgency.” Accordingly, this dissertation contributes to the inequality literature by focusing much needed attention on poverty in the South.

Each empirical chapter focuses on a different aspect of poverty in the South. Chapter 2 examines why poverty is higher in the South relative to the Non-South. Chapter 3 focuses on poverty predictors within the South and whether there are differences in the sub-regions of the Deep South and Peripheral South. These two chapters compare the roles of family demography, economic structure, racial/ethnic composition and heterogeneity, and power resources in shaping poverty. Chapter 4 examines whether poverty in the South has been shaped by historical racial regimes.

Chapter 2 results suggest that power resources, followed by economic structure, are most important in explaining the higher poverty in the South. This underscores the salience of political and economic contexts in shaping poverty across place. Chapter 3 results indicate that individual-level economic factors are the largest predictors of poverty within the South, and even more so in the Deep South. Moreover, divergent results between the South, Deep South, and Peripheral South illustrate how the impact of poverty predictors can vary in different contexts. Chapter 4 results show significant bivariate associations between historical race regimes and poverty among Southern states, although regression models fail to yield significant effects. Conversely, historical race regimes do have a small, but significant effect in explaining the Black-White poverty gap. Results also suggest that employment and education are key to understanding poverty among Blacks and the Black-White poverty gap. Collectively, these chapters underscore why place is so important for understanding poverty and inequality. They also illustrate the salience of micro and macro characteristics of place for helping create, maintain, and reproduce systems of inequality across place.