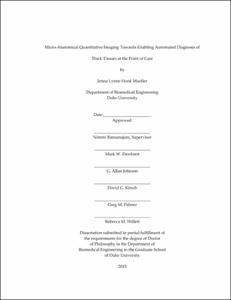 Histopathology is the clinical standard for tissue diagnosis. However, histopathology has several limitations including that it requires tissue processing, which can take 30 minutes or more, and requires a highly trained pathologist to diagnose the tissue. Additionally, the diagnosis is qualitative, and the lack of quantitation leads to possible observer-specific diagnosis. Taken together, it is difficult to diagnose tissue at the point of care using histopathology.

Several clinical situations could benefit from more rapid and automated histological processing, which could reduce the time and the number of steps required between obtaining a fresh tissue specimen and rendering a diagnosis. For example, there is need for rapid detection of residual cancer on the surface of tumor resection specimens during excisional surgeries, which is known as intraoperative tumor margin assessment. Additionally, rapid assessment of biopsy specimens at the point-of-care could enable clinicians to confirm that a suspicious lesion is successfully sampled, thus preventing an unnecessary repeat biopsy procedure. Rapid and low cost histological processing could also be potentially useful in settings lacking the human resources and equipment necessary to perform standard histologic assessment. Lastly, automated interpretation of tissue samples could potentially reduce inter-observer error, particularly in the diagnosis of borderline lesions.

To address these needs, high quality microscopic images of the tissue must be obtained in rapid timeframes, in order for a pathologic assessment to be useful for guiding the intervention. Optical microscopy is a powerful technique to obtain high-resolution images of tissue morphology in real-time at the point of care, without the need for tissue processing. In particular, a number of groups have combined fluorescence microscopy with vital fluorescent stains to visualize micro-anatomical features of thick (i.e. unsectioned or unprocessed) tissue. However, robust methods for segmentation and quantitative analysis of heterogeneous images are essential to enable automated diagnosis. Thus, the goal of this work was to obtain high resolution imaging of tissue morphology through employing fluorescence microscopy and vital fluorescent stains and to develop a quantitative strategy to segment and quantify tissue features in heterogeneous images, such as nuclei and the surrounding stroma, which will enable automated diagnosis of thick tissues.

To achieve these goals, three specific aims were proposed. The first aim was to develop an image processing method that can differentiate nuclei from background tissue heterogeneity and enable automated diagnosis of thick tissue at the point of care. A computational technique called sparse component analysis (SCA) was adapted to isolate features of interest, such as nuclei, from the background. SCA has been used previously in the image processing community for image compression, enhancement, and restoration, but has never been applied to separate distinct tissue types in a heterogeneous image. In combination with a high resolution fluorescence microendoscope (HRME) and a contrast agent acriflavine, the utility of this technique was demonstrated through imaging preclinical sarcoma tumor margins. Acriflavine localizes to the nuclei of cells where it reversibly associates with RNA and DNA. Additionally, acriflavine shows some affinity for collagen and muscle. SCA was adapted to isolate acriflavine positive features or APFs (which correspond to RNA and DNA) from background tissue heterogeneity. The circle transform (CT) was applied to the SCA output to quantify the size and density of overlapping APFs. The sensitivity of the SCA+CT approach to variations in APF size, density and background heterogeneity was demonstrated through simulations. Specifically, SCA+CT achieved the lowest errors for higher contrast ratios and larger APF sizes. When applied to tissue images of excised sarcoma margins, SCA+CT correctly isolated APFs and showed consistently increased density in tumor and tumor + muscle images compared to images containing muscle. Next, variables were quantified from images of resected primary sarcomas and used to optimize a multivariate model. The sensitivity and specificity for differentiating positive from negative ex vivo resected tumor margins was 82% and 75%. The utility of this approach was further tested by imaging the in vivo tumor cavities from 34 mice after resection of a sarcoma with local recurrence as a bench mark. When applied prospectively to images from the tumor cavity, the sensitivity and specificity for differentiating local recurrence was 78% and 82%. The results indicate that SCA+CT can accurately delineate APFs in heterogeneous tissue, which is essential to enable automated and rapid surveillance of tissue pathology.

Two primary challenges were identified in the work in aim 1. First, while SCA can be used to isolate features, such as APFs, from heterogeneous images, its performance is limited by the contrast between APFs and the background. Second, while it is feasible to create mosaics by scanning a sarcoma tumor bed in a mouse, which is on the order of 3-7 mm in any one dimension, it is not feasible to evaluate an entire human surgical margin. Thus, improvements to the microscopic imaging system were made to (1) improve image contrast through rejecting out-of-focus background fluorescence and to (2) increase the field of view (FOV) while maintaining the sub-cellular resolution needed for delineation of nuclei. To address these challenges, a technique called structured illumination microscopy (SIM) was employed in which the entire FOV is illuminated with a defined spatial pattern rather than scanning a focal spot, such as in confocal microscopy.

Thus, the second aim was to improve image contrast and increase the FOV through employing wide-field, non-contact structured illumination microscopy and optimize the segmentation algorithm for new imaging modality. Both image contrast and FOV were increased through the development of a wide-field fluorescence SIM system. Clear improvement in image contrast was seen in structured illumination images compared to uniform illumination images. Additionally, the FOV is over 13X larger than the fluorescence microendoscope used in aim 1. Initial segmentation results of SIM images revealed that SCA is unable to segment large numbers of APFs in the tumor images. Because the FOV of the SIM system is over 13X larger than the FOV of the fluorescence microendoscope, dense collections of APFs commonly seen in tumor images could no longer be sparsely represented, and the fundamental sparsity assumption associated with SCA was no longer met. Thus, an algorithm called maximally stable extremal regions (MSER) was investigated as an alternative approach for APF segmentation in SIM images. MSER was able to accurately segment large numbers of APFs in SIM images of tumor tissue. In addition to optimizing MSER for SIM image segmentation, an optimal frequency of the illumination pattern used in SIM was carefully selected because the image signal to noise ratio (SNR) is dependent on the grid frequency. A grid frequency of 31.7 mm-1 led to the highest SNR and lowest percent error associated with MSER segmentation.

Once MSER was optimized for SIM image segmentation and the optimal grid frequency was selected, a quantitative model was developed to diagnose mouse sarcoma tumor margins that were imaged ex vivo with SIM. Tumor margins were stained with acridine orange (AO) in aim 2 because AO was found to stain the sarcoma tissue more brightly than acriflavine. Both acriflavine and AO are intravital dyes, which have been shown to stain nuclei, skeletal muscle, and collagenous stroma. A tissue-type classification model was developed to differentiate localized regions (75x75 µm) of tumor from skeletal muscle and adipose tissue based on the MSER segmentation output. Specifically, a logistic regression model was used to classify each localized region. The logistic regression model yielded an output in terms of probability (0-100%) that tumor was located within each 75x75 µm region. The model performance was tested using a receiver operator characteristic (ROC) curve analysis that revealed 77% sensitivity and 81% specificity. For margin classification, the whole margin image was divided into localized regions and this tissue-type classification model was applied. In a subset of 6 margins (3 negative, 3 positive), it was shown that with a tumor probability threshold of 50%, 8% of all regions from negative margins exceeded this threshold, while over 17% of all regions exceeded the threshold in the positive margins. Thus, 8% of regions in negative margins were considered false positives. These false positive regions are likely due to the high density of APFs present in normal tissues, which clearly demonstrates a challenge in implementing this automatic algorithm based on AO staining alone.

Thus, the third aim was to improve the specificity of the diagnostic model through leveraging other sources of contrast. Modifications were made to the SIM system to enable fluorescence imaging at a variety of wavelengths. Specifically, the SIM system was modified to enabling imaging of red fluorescent protein (RFP) expressing sarcomas, which were used to delineate the location of tumor cells within each image. Initial analysis of AO stained panels confirmed that there was room for improvement in tumor detection, particularly in regards to false positive regions that were negative for RFP. One approach for improving the specificity of the diagnostic model was to investigate using a fluorophore that was more specific to staining tumor. Specifically, tetracycline was selected because it appeared to specifically stain freshly excised tumor tissue in a matter of minutes, and was non-toxic and stable in solution. Results indicated that tetracycline staining has promise for increasing the specificity of tumor detection in SIM images of a preclinical sarcoma model and further investigation is warranted.

In conclusion, this work presents the development of a combination of tools that is capable of automated segmentation and quantification of micro-anatomical images of thick tissue. When compared to the fluorescence microendoscope, wide-field multispectral fluorescence SIM imaging provided improved image contrast, a larger FOV with comparable resolution, and the ability to image a variety of fluorophores. MSER was an appropriate and rapid approach to segment dense collections of APFs from wide-field SIM images. Variables that reflect the morphology of the tissue, such as the density, size, and shape of nuclei and nucleoli, can be used to automatically diagnose SIM images. The clinical utility of SIM imaging and MSER segmentation to detect microscopic residual disease has been demonstrated by imaging excised preclinical sarcoma margins. Ultimately, this work demonstrates that fluorescence imaging of tissue micro-anatomy combined with a specialized algorithm for delineation and quantification of features is a means for rapid, non-destructive and automated detection of microscopic disease, which could improve cancer management in a variety of clinical scenarios.