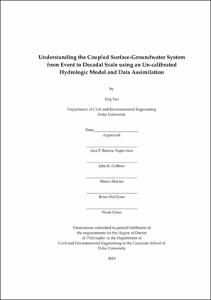 In this dissertation, a Hydrologic Data Assimilation System (HDAS) relying on the Duke Coupled surface-groundwater Hydrology Model (DCHM) and various data assimilation techniques including EnKF (Ensemble Kalman Filter), the fixed-lag EnKS (Ensemble Kalman Smoother) and the Asynchronous EnKF (AEnKF) was developed to 1) investigate the hydrological predictability of precipitation-induced natural hazards (i.e. floods and landslides) in the Southern Appalachians in North Carolina, USA, and 2) to characterize the seasonal (wet/dry) and inter-annual variability of surface-groundwater interactions with implications for water resource management in the Upper Zambezi River Basin (UZRB) in southern Africa. The overarching research objective is to improve hydrologic predictability of precipitation-induced natural hazards and water resources in regions of complex terrain. The underlying research hypothesis is that hydrologic response in mountainous regions is governed by surface-subsurface interaction mechanisms, specifically interflow in soil-mantled slopes, surface-groundwater interactions in recharge areas, and wetland dynamics in alluvial floodplains at low elevations. The research approach is to investigate the modes of uncertainty propagation from atmospheric forcing and hydrologic states on processes at multiple scales using a parsimonious uncalibrated hydrologic model (i.e. the DCHM), and Monte Carlo and Data-Assimilation methods. In order to investigate the coupled surface-groundwater system and assess the predictability of precipitation-induced natural hazards (i.e. floods and landslides) in headwater basins, including the propagation of uncertainty in QPE/QPF (Quantitative Precipitation Estimates/Forecasts) to QFE/QFF (Quantitative Flood Estimates/Forecasts), the DCHM model was implemented first at high spatial resolution (250m) in the Southern Appalachian Mountains (SAM) in North Carolina, USA. The DCHM modeling system was implemented subsequently at coarse resolution (5 km) in the Upper Zambezi River Basin (UZRB) in southern Africa for decadal-scale simulations (i.e. water years from 2002 to 2012).

The research in the SAM showed that joint QPE-QFF distributions for flood response at the headwater catchment scale are highly non-linear with respect to the space-time structure of rainfall, exhibiting strong dependence on basin physiography, initial soil moisture conditions (transient basin storage capacity), the space-time organization of runoff generation and conveyance mechanisms, and in particular interflow dynamics. The errors associated with QPEs and QPFs were characterized using rainfall observations from a dense raingauge network in the Pigeon River Basin, resulting in a simple linear regression model for adjusting/improving QPEs. Deterministic QFEs simulated by the DCHM agree well with observations, with Nash–Sutcliffe (NS) coefficients of 0.8~0.9. Limitations with state-of-the-science operational QPF and the impact of even limited improvements in rainfall forcing was demonstrated through an experiment consisting of nudging satellite-like observations (i.e. Adjusted QPEs) into operational QPE/QPF that showed significant improvement in QFF performance, especially when the timing of satellite overpass is such that it captures transient episodes of heavy rainfall during the event. The research further showed that the dynamics of subsurface hydrologic processes play an important role as a trigger mechanism of shallow landslides through soil moisture redistribution by interflow. Specifically, transient mass fluxes associated with the temporal-spatial dynamics of interflow govern the timing of shallow landslide initiation, and subsequent debris flow mobilization, independently of storm characteristics such as precipitation intensity and duration. Interflow response was shown to be dominant at high elevations in the presence of deep soils as well as in basins with large alluvial fans or unconsolidated debris flow deposits. In recharge areas and where subsurface flow is an important contribution to streamflow, subsurface-groundwater interactions determine initial hydrologic conditions (e.g. soil moisture states and water table position), which in turn govern the timing and magnitude of flood response at the event scale. More generally, surface-groundwater interactions are essential to capture low flows in the summer season, and generally during persistent dry weather and drought conditions. Future advances in QFF and landslide monitoring remain principally constrained by progress in QPE and QPF at the spatial resolution necessary to resolve rainfall-interflow dynamics in mountainous regions.

The predictability of QFE/QFF was further scrutinized in a complete operational environment during the Intense Observing Period (IOP) of the Integrated Precipitation and Hydrology Experiment (IPHEx-IOP), in order to investigate the predictability of floods (and flashfloods) in headwater catchments in the Southern Appalachians with various drainage sizes. With the DCHM, a variety of operational QPEs were used to produce hydrological hindcasts for the previous day, from which the final states were used as initial conditions in the hydrological forecast for the current day. Although the IPHEx operational testbed results were promising in terms of not having missed any of the flash flood events during the IOP with large lead times of up to 6 hours, significant errors of overprediction or underprediction were identified that could be traced back to the QPFs and subgrid-scale variability of radar QPEs. Furthermore, the added value of improving QFE/QFF through assimilating discharge observations into the DCHM was investigated for advancing flood forecasting skills in the operational mode. Both the flood hindcast/forecast results were significantly improved by assimilating the discharge observations into the DCHM using the EnKF (Ensemble Kalman Filter), the fixed-lag EnKS (Ensemble Kalman Smoother) and Asynchronous EnKF (AEnKF). The results not only demonstrate the utility of discharge assimilation in operational forecasts, but also reveal the importance of initial water storage in the basin for issuing flood forecasts. Specifically, hindcast NSEs as high as 0.98, 0.71 and 0.99 at 15-min time-scales were attained for three headwater catchments in the inner mountain region, demonstrating that assimilation of discharge observations at the basin’s outlet can reduce the errors and uncertainties in soil moisture. Success in operational flood forecasting at lead times of 6, 9, 12 and 15hrs was also achieved through discharge assimilation, with NSEs of 0.87, 0.78, 0.72 and 0.51, respectively. The discharge assimilation experiments indicate that the optimal assimilating time window not only depends on basin properties but also on the storm-specific space-time-structure of rainfall within the basin, and therefore adaptive, context-aware configurations of the data assimilation system should prove useful to address the challenges of flood prediction in headwater basins.

A physical parameterization of wetland hydrology was incorporated in the DCHM for water resource assessment studies in the UZRB. The spatial distribution of wetlands was introduced in the model using probability occurrence maps generated by logistic regression models using MODIS reflectance-based indices as predictor variables. Continuous model simulations for the 2002-2012 period show that the DCHM with wetland parameterization was able to reproduce wetland hydrology processes adequately, including surface-groundwater interactions. The modelled regional terrestrial water storage anomaly (TWSA) captured very well the inter- and intra-annual variability of the system water storage changes in good agreement with the NASA’s GRACE (Gravity Recovery and Climate Experiment) TWSA observations. Specifically, the positive trend of TWSA documented by GRACE was simulated independently by the DCHM. Furthermore, it was determined that the TSWA positive trend results from cumulative water storage in the sandy soils of the Cuando-Luana sub-basin when shifts in storm tracks move rainfall to the western sector of the Angolan High Plateau.

Overall, the dissertation study demonstrates the capability of the DCHM in predicting specific characteristics of hydrological response to extreme events and also the inter- and intra-annual variability of surface-groundwater interactions at a decadal scale. The DCHM, coupled with slope stability module and wetland module featuring surface-groundwater interaction mechanism, not only is of great potential in the context of developing a regional warning system for natural hazards (i.e. flashfloods and landslides), but also is promising in investigating regional water budgets at decadal scale. In addition, the DCHM-HDAS demonstrated the ability to reduce forecasting uncertainty and errors associated with forcing data and the model proper, thus significantly improving the predictability of natural hazards. The HDAS could also be used to investigate the regional water resource assessment especially in poorly-gauged regions (e.g. southern Africa), taking advantage of satellite observations.