The Molecular Biology of Lichen Symbiosis and Development 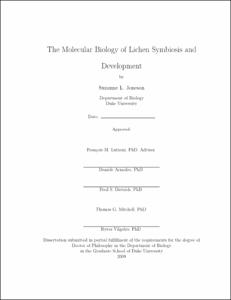 Lichen-forming fungi employ a successful mode of nutrition as symbiotic partners with green algae and/or cyanobacteria (the photobiont). Nearly one fifth of all known fungi are obligate lichen formers, yet we know little of how they find compatible partners and establish long-lived symbiotic relationships. The combined growth of these symbionts forms a body (thallus) with emergent properties unlike either of the symbionts individually grown. Based on other well-studied eukaryotic systems, the development of a lichen thallus must rely upon the successful identification and collaboration of these two very different organisms. Identifying the molecular basis of microbe recognition and interactions remains one of the greatest challenges in studying symbiotic systems.

Further results of this study show that the fungal protein products of genes upregulated in lichen symbiosis show significant matches to proteins putatively involved in fungal self and non-self recognition, lipid metabolism, negative regulation of glucose repressible genes, an oxidoreductase, a dioxygenase, and a conserved hypothetical protein. Algal genes that are upregulated in lichen symbiosis include a chitinase-like protein, an amino acid metabolism protein, a dynein related protein, and a protein arginine methyltransferase. Furthermore, genes that are expressed in the early stages of lichen symbiosis are common varying metabolic pathways. Furthermore stages 1 and 2 of development are marked not by a drastic change in transcriptional products, but instead by an overall change in genes that are already expressed. Finally, the <italic>Cladonia~grayi Lip3</italic>was cloned in its entirety from genomic DNA and cDNA, was predicted to be secreted using signal peptide prediction software, and shown to be a functioning secreted extracellular lipase in yeast.

I conclude that many genes are involved in the interactions of symbionts and the development of a stratified lichen thallus, and that many more genes remain to be discovered. Furthermore, the possibility that genes exist in either symbiont that are specific to lichen symbiosis remains, and that their discovery awaits the creation of better genomic tools for \textit{Cladonia~grayi} and <italic>Asterochloris</italic>.