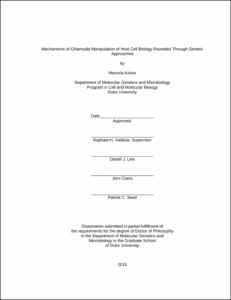 Chlamydia trachomatis is the most common sexually transmitted bacterial pathogen and is the leading cause of preventable blindness worldwide. Chlamydia is particularly intriguing from the perspective of cell biology because it is an obligate intracellular pathogen that manipulates host cellular pathways to ensure its proliferation and survival. This is achieved through a significant remodeling of the host cell’s internal architecture from within a membrane-bound vacuole, termed the inclusion. However, given a previous lack of tools to perform genetic analysis, the mechanisms by which Chlamydia induces host cellular changes remained unclear. Here I present genetic and molecular mechanisms of chlamydial manipulation of the host cytoskeleton and organelles. Using a forward genetics screen, InaC was identified as a necessary factor for the assembly of an F-actin structure surrounding the inclusion. InaC associated with the vacuolar membrane where it recruited Golgi-specific ARF-family GTPases. Actin dynamics and ARF GTPases regulate Golgi morphology and positioning within cells, and InaC acted to redistribute the Golgi to surround the Chlamydia inclusion. These findings suggest that Chlamydia places InaC at the inclusion-cytosolic interface to recruit host ARF GTPases and F-actin to form a platform for rearranging intracellular organelles around the inclusion. The inclusion is also surrounded by the intermediate filament vimentin and the chlamydial protease CPAF cleaves vimentin in vitro. CPAF-dependent remodeling of vimentin occurred selectively in late stages of the infection. In living cells, this cleavage occurred only after a loss of inclusion membrane integrity, suggesting that CPAF cleaves intermediate filaments specifically during chlamydial exit of host cells. In summary, I have implemented recent forward and reverse genetic approaches in Chlamydia to reveal how it employs effector proteins to manipulate the internal organization of cells in novel ways.