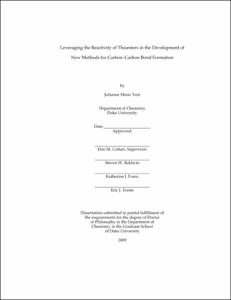 Carbon–carbon bond-forming reactions comprise the most important class of synthetic transformations. The development of improved and simplified approaches to these reactions will make important and useful contributions not only to the field of synthetic organic chemistry, but also to the many other areas of science that rely on it. Enolate based carbon–carbon bond formation is fundamental to synthetic organic chemistry and has provided the foundation for advancement to its present state. Herein, an important aspect of enolate chemistry is explored: the development of direct methods for carbon–carbon bond formation based on soft enolization of thioesters. Both metal-mediated and organocatalytic approaches to soft enolization are described.

MgBr2·OEt2-promoted soft enolization conditions were developed and successfully applied to the aldol addition and Mannich reactions, resulting in a mild and efficient direct reaction that is inexpensive and can be used under atmospheric conditions. A conjugate addition approach to chemoselective deprotonation was also explored and applied to the aldol. In addition, the first organocatalytic Mannich reaction based on proximity-accelerated intramolecular soft enolization of thioesters was developed. Given the advantages of soft enolization, including the inherent operational simplicity, and the accessibility of thioesters, we expect these methods to meet with wide application.