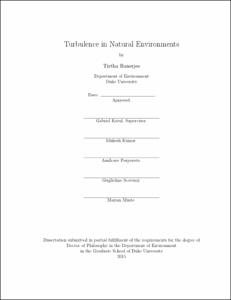 Problems in the area of land/biosphere-atmosphere interaction, hydrology, climate modeling etc. can be systematically organized as a study of turbulent flow in presence of boundary conditions in an increasing order of complexity. The present work is an attempt to study a few subsets of this general problem of turbulence in natural environments- in the context of neutral and thermally stratified atmospheric surface layer, the presence of a heterogeneous vegetation canopy and the interaction between air flow and a static water body in presence of flexible protruding vegetation. The main issue addressed in the context of turbulence in the atmospheric surface layer is whether it is possible to describe the macro-states of turbulence such as mean velocity and turbulent velocity variance in terms of the micro-states of the turbulent flow, i.e., a distribution of turbulent kinetic energy across a multitude of scales. This has been achieved by a `spectral budget approach' which is extended for thermal stratification scenarios as well, in the process unifying the seemingly different and unrelated theories of turbulence such as Kolmogorov's hypothesis, Heisenberg's eddy viscosity, Monin Obukhov Similarity Theory (MOST) etc. under a common framework. In the case of a more complex scenario such as presence of a vegetation canopy with edges and gaps, the question that is addressed is in what detail the turbulence is needed to be resolved in order to capture the bulk flow features such as recirculation patterns. This issue is addressed by a simple numerical framework and it has been found out that an explicit prescription of turbulence is not necessary in presence of heterogeneities such as edges and gaps where the interplay between advection, pressure gradients and drag forces are sufficient to capture the first order dynamics. This result can be very important for eddy-covariance flux calibration strategies in non-ideal environments and the developed numerical model can be used in related dispersion studies and coupled land atmosphere interaction models. For other more complex biosphere atmosphere interactions such as greenhouse gas emissions from wetlands, the interplay between air and water, often in presence of flexible aquatic vegetation, controls turbulence in water, which in turn affect the gas transfer processes. This process of wind shear induced wave-turbulent-vegetation interaction is studied for the first time in the laboratory and the state of turbulence as well as the bulk flow is found to be highly sensitive to environmental controls such as water height, wind speed, vegetation density and flexibility. This dissertation describes and gradually develops these concepts in an increasing order of complexity of boundary conditions. The first three chapters address the neutral and thermally stratified boundary layers and the last two chapters address the canopy edge problem and the air-water-vegetation experiments respectively.