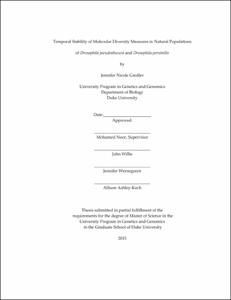 Many molecular ecological and evolutionary studies sample wild populations at a single point in time, failing to consider that data they collect represents genetic variation from a potentially unrepresentative snapshot in time. Variation across time in genetic parameters may occur quickly in species that produce multiple generations of offspring per year. However, many studies of rapid contemporary microevolution examine phenotypic trait divergence as opposed to molecular evolutionary divergence. Here, we compare genetic diversity in wild caught populations of Drosophila persimilis and D. pseudoobscura collected 16 years apart at the same time of year and same site at four X-linked and two mitochondrial loci to assess genetic stability. We found no major changes in nucleotide diversity in either species, but we observed a drastic shift in Tajima’s D between D. pseudoobscura timepoints at one locus associated with the increased abundance of a set of related haplotypes. Our data also suggests that D. persimilis may have recently accelerated its demographic expansion. While the changes we observed were modest, this study reinforces the importance of considering potential temporal variation in genetic parameters within single populations over short evolutionary timescales.