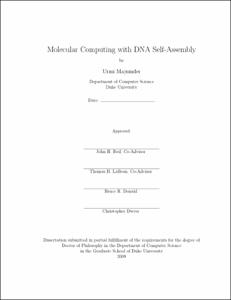 Synthetic biology is an emerging technology field whose goal is to use biology as a substrate for engineering. Self-assembly is one of the many methods for fabricating such synthetic biosystems.

Self-assembly is a process where components spontaneously arrange themselves into organized aggregates by the selective affinity of substructures. DNA is an excellent candidate for making synthetic biological systems using self-assembly because of its modular structure and simple chemistry. This thesis describes several

techniques which use DNA as a nano-construction material and

For this dissertation, I set out to build a biomolecular computing device with several

and convergence rates. However, a unified device that satisfies all these properties is still many years away. Instead, this thesis presents designs, simulations,

and experimental results for several distinct DNA nano-systems, as

well as experimental protocols, each of which satisfies a subset of the above-mentioned properties. The hope is that the lessons learned from building all these biomolecular computational devices would bring us closer to our ultimate goal and would eventually pave the path for a computing device that satisfies all the properties. We experimentally demonstrate how we can reduce errors in tiling assembly using an optimized set of physical parameters. We propose a novel DNA tile design

which enforces directionality of growth, reducing assembly errors. We build simulation models to characterize damage in fragile nanostructures under the impact of various external forces. Furthermore, we investigate reversible computation as a means to provide self-repairability to such damaged structures.

We suggest two modifications of an existing DNA computing device,

called Whiplash PCR machine, which allow it to operate robustly outside of controlled laboratory conditions and allow it to implement a simple form of inter-device communication. We present analysis techniques which characterize the yields and time convergence of self-assembled DNA nanostructures. We also present an experimental demonstration of a novel DNA nanostructure which is capable of tiling the plane and could prove to be a way of building 3D DNA assemblies.