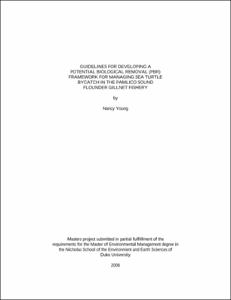 View / Download
389.8 Kb
Date
Author
Young, Nancy
Advisor
Read, Andrew J
Repository Usage Stats
1,182
views
1,281
downloads
Abstract
Bycatch of sea turtles is a serious management problem in the Pamlico Sound flounder gillnet fishery. Three species of sea turtles are caught in this fishery and are protected under the Endangered Species Act. In this paper, I argue that the current scheme for managing sea turtle bycatch under the Endangered Species Act is flawed, and I suggest adapting a mechanism used for marine mammals, the potential biological removal (PBR) approach, for use in sea turtles. PBR is a useful approach for calculating allowable incidental take levels. It is a simple, data-driven formula requiring a minimum amount of data. It is conservative in that it uses minimum population estimates and a recovery factor based on the population status, addresses data uncertainty in a straightforward way, and follows the precautionary principle with more conservative management when data are less precise. PBR is also comprehensive because it calculates total take per stock. Finally, it was developed as the result of extensive modeling that evaluated the performance of the decision rule based on explicit risk thresholds. Because PBR was developed for marine mammals, the approach and equation must be modified before it can be used for sea turtles. I describe these modifications, and list methods and sources for obtaining the necessary data. There are no fundamental data limitations to calculating PBR for sea turtles, but political resistance may prove a more difficult challenge. Without clear incentives for implementing a PBR framework, it will be difficult to move beyond the status quo. But by providing an example of how PBR would work, as I have done here for the Pamlico Sound flounder gillnet fishery, this approach may gain support. As Biological Opinions and jeopardy decisions are increasingly challenged, managers and other stakeholders may see the advantages of PBR and provide the pressure necessary to change the current sea turtle bycatch management scheme.
Type
Master's project
Department
Nicholas School of the Environment and Earth Sciences
Subject
Endangered Species Act (ESA)
Permalink
https://hdl.handle.net/10161/106
Citation
Young, Nancy (2006). Guidelines for Developing a Potential Biological Removal (PBR) Framework for Managing Sea Turtle Bycatch in the Pamlico Sound Flounder Gillnet Fishery. Master's project, Duke University. Retrieved from https://hdl.handle.net/10161/106.
Collections
More Info
Show full item record