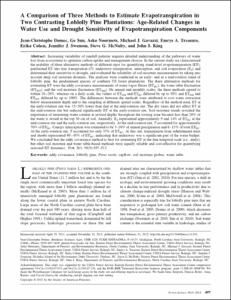 View / Download
1.9 Mb
Date
Authors
Domec, Jean-Christophe
Sun, Ge
Noormets, Asko
Gavazzi, Michael J
Treasure, Emrys A
Cohen, Erika
Swenson, Jennifer J
McNulty, Steve G
King, John S
Show More
(9 total)
Repository Usage Stats
654
views
281
downloads
Abstract
Increasing variability of rainfall patterns requires detailed understanding of the pathways of water loss from ecosystems to optimize carbon uptake and management choices. In the current study we characterized the usability of three alternative methods of different rigor for quantifying stand-level evapotranspiration (ET), partitioned ET into tree transpiration (T), understory transpiration, interception, and soil evaporation (E S) and determined their sensitivity to drought, and evaluated the reliability of soil moisture measurements by taking into account deep soil moisture dynamic. The analyses were conducted in an early- and in a mid-rotation stand of loblolly pine, the predominant species of southern US forest plantations. The three alternative methods for estimating ET were the eddy covariance measurements of water vapor fluxes (ET EC), the water table fluctuation (ET WT), and the soil moisture fluctuation (ET SM). On annual and monthly scales, the three methods agreed to within 10-20%, whereas on a daily scale, the values of ET SM and ET EC differed by up to 50% and ET SM and ET WT differed by up to 100%. The differences between the methods were attributed to root water extraction below measurement depth and to the sampling at different spatial scales. Regardless of the method used, ET at the early-rotation site was 15-30% lower than that at the mid-rotation site. The dry years did not affect ET at the mid-rotation site but reduced significantly ET at the early-rotation site. Soil moisture trends revealed the importance of measuring water content at several depths throughout the rooting zone because less than 20% of the water is stored in the top 30 cm of soil. Annually, E S represented approximately 9 and 14% of ET EC at the mid-rotation site and the early-rotation site, respectively. At the mid-rotation site, T accounted for approximately 70% of ET EC. Canopy interception was estimated to be 5-10% of annual precipitation and 6-13% of total ET EC. At the early-rotation site, T accounted for only 35% of ET EC. At this site, transpiration from subdominant trees and shrubs represented 40-45% of ET EC, indicating that understory was a significant part of the water budget. We concluded that the eddy covariance method is best for estimating ET at the fine temporal scale (i.e., daily), but other soil moisture and water table-based methods were equally reliable and cost-effective for quantifying seasonal ET dynamics.© 2012 by the Society of American Foresters.
Type
Journal article
Permalink
https://hdl.handle.net/10161/10635
Published Version (Please cite this version)
10.5849/forsci.11-051
Publication Info
Domec, Jean-Christophe; Sun, Ge; Noormets, Asko; Gavazzi, Michael J; Treasure, Emrys A; Cohen, Erika; ... King, John S (2012). A comparison of three methods to estimate evapotranspiration in two contrasting loblolly pine plantations: Age-related changes in water use and drought sensitivity of evapotranspiration components. Forest Science, 58(5). pp. 497-512. 10.5849/forsci.11-051. Retrieved from https://hdl.handle.net/10161/10635.
This is constructed from limited available data and may be imprecise. To cite this article, please review & use the official citation provided by the journal.
Collections
More Info
Show full item record Visiting Professorin the Nicholas School of the Environment
Bordeaux Sciences Agro in FRANCE (primary appointment)Discovery of knowledge in Plant water relations, ecosystem ecology and ecohydrology, with special focus on: - Long-distance water transport under future climate; - Drought tolerance and avoidance; - Patterns of changes in structural and functional traits within individual plants. My goal as a researcher is to improve the fundamental science understanding of how plants and terrestrial ecosystems respond to climate Associate Professor of the Practice of Geospatial Analysis
Swenson's research tracks changes in terrestrial Earth's living surface at the landscape to region scale with remote sensing and geospatial analysis. Her interest include: how patterns and canopy structure are effected by drought, afforestation, and deforestation, patterns and climate shifts of ecosystem biodiversity, and providing access to practitioners to remotely sensed data and analysis. Prior to her 15 years in Duke's Nicholas School of the Environment, she held positions in NGOs (NatureSe
Alphabetical list of authors with Scholars@Duke profiles.