Genetic variants in the TEP1 gene are associated with prostate cancer risk and recurrence. 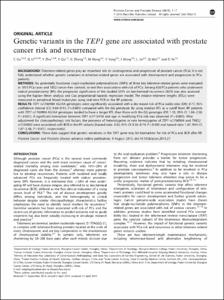