Transition in Post-soviet Art: "Collective Actions" before and after 1989 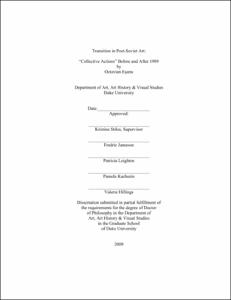 For more than three decades the Moscow-based conceptual artist group "Collective Actions" has been organizing actions. Each action, typically taking place at the outskirts of Moscow, is regarded as a trigger for a series of intellectual activities, such as analysis, interpretation, narration, and description. The artists have systematically recorded and transcribed these activities, collecting and assembling texts, diagrams, and photographs in a ten-volume publication entitled "Journeys Outside the City." Five volumes of this publication concern the activities of the group before, and five after, 1989. Over the years the "Journeys Outside the City" became an idiosyncratic, self-sufficient aesthetic discourse arrayed along a constellation of concepts developed by those engaged in "Collective Actions." In its elusive hermeticism and self-referentiality the aesthetic framework constructed by these artists formed a closed system, gathering bundles of signs that seldom referred to anything concrete outside the horizon of Moscow Conceptualism. It is in this regard that the early volumes of the "Journeys Outside the City" can be compared to the similarly closed ideological discourse of the Soviet Politburo. After 1989, however, with the transition from socialism to capitalism, the aesthetic and artistic language of this group began to change as its text-based self-sufficient system began to open up under pressure from new socioeconomic conditions introduced by the processes of democratization and liberalization.

My dissertation "Transition in Post-Soviet Art: `Collective Actions' Before and After 1989" is neither a history of nor a monographical work on "Collective Actions," but rather an analytical exploration of aesthetic, artistic and institutional changes that have transpired in the "Journeys Outside the City" during the transition from socialism to capitalism. As the artists migrated from one art historical category into another (from the status of "unofficial artists" to that of "contemporary artists"), their aesthetics and art revealed a series of stylistic, technical, formal, textual, and aesthetical transformations and metamorphoses that paralleled broader cultural conversions taking place in post-Soviet and Eastern European art during the transition to capitalism.