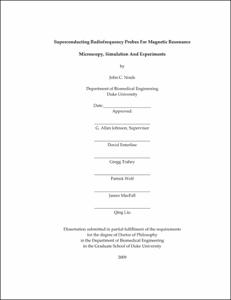 We present a method based on finite-element radiofrequency simulations. The radiofrequency model computes several figures of merit of a probe, namely: i) the resonant frequency, ii) the impedance, iii) the magnetic field homogeneity, iv) the filling factor, and v) the sensitivity. The probe is constituted by several components. The method calculates the electromagnetic losses induced by every component within the probe, and identifies the component limiting the sensitivity of the probe. Subsequently, the probe design can be improved iteratively.

We show that the sensitivity of an existing superconducting Helmholtz pair can be improved by increasing the filling factor of the probe and cooling the radiofrequency shield, which was implemented in the design of a new superconducting probe. The second probe exhibits a sensitivity three times as high, leading to improved imaging performance.