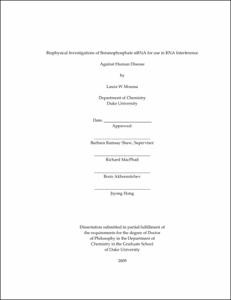 This project is predicated on the ability of the boranophosphate modification of siRNA to increase its therapeutic applicability for gene silencing in in vitro and in vivo systems. It has been shown that the boranophosphate (BH3-PO3) can overcome many of the limitations that are traditionally found when using RNAi, namely nuclease stability. The synthesis of siRNA modified with 5'-(alpha-P-borano)-nucleoside triphosphates (NTP) analogs alone and in combination with 2'-deoxy-2'-fluoro nucleoside triphosphate analogs were performed and optimized. It was found that normal RNA transcriptions showed the highest yield with higher NTP concentrations and shorter incubation times. Boranophosphate modified RNA and 2'F/borano modified RNA transcription yield was optimal at lower NTP concentrations and extended incubations. The boranophosphate NTPs and RNA were characterized with high performance liquid chromatography, mass spectrometry, and nuclear magnetic resonance, indicating successful synthesis of NTPalphaB and 2'F NTPs. PAGE and mass spectrometry analysis were performed to ensure full-length transcription of the modified siRNA molecules. The effects of these modifications were explored with respect to the biophysical properties of the modified homoduplex and heteroduplex siRNA. The techniques used in this work included hybridization affinity assays (melting temperature), secondary structure determination (circular dichroism), nuclease stability assays, and assessment of the lipophilicity of the modified siRNA by determining partition coefficients.

Modification of siRNA with boranophosphate and 2'fluoro/borano modified NTPs appears to have caused the homoduplexes and heteroduplexes to adopt a more B form-like helix that had lower Tm compared to unmodified RNA. The stability of the siRNA transcript to enzymatic hydrolysis by Exonuclease T was on the order of 2'fluoro/borano> normal = boranophosphate. Boranophosphate modification increased the stability of the transcript to enzymatic hydrolysis by the endonuclease RNase A, compared to both normal and 2' fluoro modified siRNA. Overall, the 2' fluoro/borano modified siRNA showed the greatest biological stability. Modification of the siRNA with increasing percentages of boranophosphates resulted in increasing lipophilicity of the molecule up to 60-fold, compared to both normal and 2' fluoro RNA.

A method to site-specifically modify the boranophosphate siRNA using T4 RNA ligase was also investigated. Finally, the siRNA in this work was tested in several in vitro systems, yielding promising results for the usage of boranophosphate siRNA for use against human viruses and cancers. It was shown that in for in vitro systems for human papillomavirus gene expression (HeLa, SiHa, and W12E) and luciferase expression (B16F10 cells), boranophosphate modified siRNA can specifically downregulate gene expression, and in the case of human papillomavirus, can downregulate cell growth.