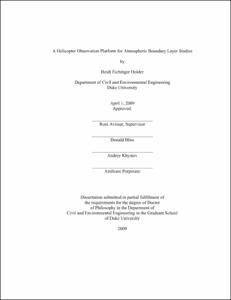 Because measurements must be made in such a way that they are as uncontaminated by the platform itself as much as is possible, it is necessary to quantify the aerodynamic envelope of the HOP. The results of an analytical analysis of the location of the main rotor wake at various airspeeds are shown. Similarly, the results of a numerical analysis using the commercial Computational Fluid Dynamics software Fluent are shown. The optimal flight speed for the sampling of turbulent fluxes is found to be around 30 m/s. At this airspeed, the sensors located in front of the nose of the HOP are in advance of the wake generated by the main rotor. This airspeed is also low enough that the region of high pressure due to the stagnation point on the nose of the HOP does not protrude far enough forward to affect the sensors. Measurements of differential pressures, variables and turbulent fluxes made while flying the HOP at different airspeeds support these results. No systematic effects of the platform are seen at airspeeds above about 10 m/s.

Processing of HOP data collected using the current set of sensors is discussed, including the novel use of the Empirical Mode Decomposition (EMD) to detrend and filter the data. The EMD separates the data into a finite number of Impirical Mode Functions (IMFs), each of which is unique and orthogonal. The basis is determined by the data itself, so that it need not be known a priori, and it is adaptive. The EMD is shown to be an ideal tool for the filtering and detrending of HOP data using data gathered during the Cloud and Land Surface Interaction Campaign (CLASIC).

The ability of the HOP to accurately measure atmospheric profiles of potential temperature is demonstrated. During experiments conducted in the marine boundary layer (MBL) and the convective boundary layer (CBL), HOP profiles are evaluated using profiles from an elastic backscatter lidar. The HOP and the lidar agree on the height of the boundary layer in both cases, and the HOP effectively locates other atmospheric structures.

Atmospheric sensible and latent heat fluxes, turbulence kinetic energy (TKE) and horizontal momentum fluxes are also measured, and the resulting information is used to provide context to tower-based data collected concurrently. A brief comparison made over homogeneous ocean conditions yields good results. A more exhaustive evaluation is made using short HOP flights made over an orchard during the Canopy Horizontal Turbulence Study (CHATS).