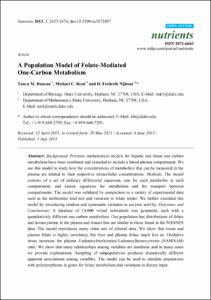 View / Download
1.5 Mb
Date
Authors
Duncan, Tanya M
Reed, Michael C
Nijhout, H Frederik
Repository Usage Stats
194
views
264
downloads
Abstract
BACKGROUND: Previous mathematical models for hepatic and tissue one-carbon metabolism have been combined and extended to include a blood plasma compartment. We use this model to study how the concentrations of metabolites that can be measured in the plasma are related to their respective intracellular concentrations. METHODS: The model consists of a set of ordinary differential equations, one for each metabolite in each compartment, and kinetic equations for metabolism and for transport between compartments. The model was validated by comparison to a variety of experimental data such as the methionine load test and variation in folate intake. We further extended this model by introducing random and systematic variation in enzyme activity. OUTCOMES AND CONCLUSIONS: A database of 10,000 virtual individuals was generated, each with a quantitatively different one-carbon metabolism. Our population has distributions of folate and homocysteine in the plasma and tissues that are similar to those found in the NHANES data. The model reproduces many other sets of clinical data. We show that tissue and plasma folate is highly correlated, but liver and plasma folate much less so. Oxidative stress increases the plasma S-adenosylmethionine/S-adenosylhomocysteine (SAM/SAH) ratio. We show that many relationships among variables are nonlinear and in many cases we provide explanations. Sampling of subpopulations produces dramatically different apparent associations among variables. The model can be used to simulate populations with polymorphisms in genes for folate metabolism and variations in dietary input.
Type
Journal article
Subject
Carbon
Diet
Folic Acid
Homocysteine
Humans
Liver
Methionine
Methylenetetrahydrofolate Reductase (NADPH2)
Models, Theoretical
Nutrition Surveys
Oxidative Stress
Polymorphism, Genetic
Permalink
https://hdl.handle.net/10161/10748
Published Version (Please cite this version)
10.3390/nu5072457
Publication Info
Duncan, Tanya M; Reed, Michael C; & Nijhout, H Frederik (2013). A population model of folate-mediated one-carbon metabolism. Nutrients, 5(7). pp. 2457-2474. 10.3390/nu5072457. Retrieved from https://hdl.handle.net/10161/10748.
This is constructed from limited available data and may be imprecise. To cite this article, please review & use the official citation provided by the journal.
Collections
More Info
Show full item record John Franklin Crowell Distinguished Professor of Biology
Fred Nijhout is broadly interested in developmental physiology and in the interactions between development and evolution. He has several lines of research ongoing in his laboratory that on the surface may look independent from one another, but all share a conceptual interest in understanding how complex traits arise through, and are affected by, the interaction of genetic and environmental factors. 1) The control of polyphenic development in insects. This work attempts to understand how the Professor of Mathematics
Professor Reed is engaged in a large number of research projects that involve the application of mathematics to questions in physiology and medicine. He also works on questions in analysis that are stimulated by biological questions. For recent work on cell metabolism and public health, go to sites@duke.edu/metabolism. Since 2003, Professor Reed has worked with Professor Fred Nijhout (Duke Biology) to use mathematical methods to understan
Alphabetical list of authors with Scholars@Duke profiles.