The Contradictions of Genre in the Nehemiah Memorial 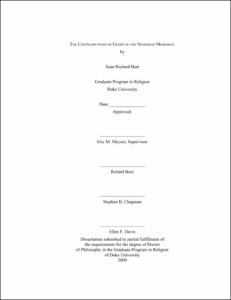 The first-person Hebrew narrative of the Persian courtier sent to be governor of Judah, the "Nehemiah Memorial" (or NM: Neh 1-2:20; 3:33-7:3; 13:4-31), is a crucial text for understanding how elements within ancient Judaism conceived of their relationship to the Persian Achaemenid Empire, which ruled over Judah from the 6th to the 4th centuries BCE. This dissertation investigates NM via the issue of genre. Scholarship on NM in recent years has reached an impasse on this topic, suggesting that NM resists identification with any one genre. Newer developments in genre theory, however, offer resources for understanding genre not simply as a classificatory matter but also as a malleable relationship between writers and readers that can be exploited for rhetorical effect. NM makes use of two main genres: a "foreign court narrative" (cf. Daniel, Esther, and the Joseph narrative) slowly transforms into a biographical inscription or "official memorial", a genre attested throughout the ancient Near East. The subtle combination of these different genres suggests that Nehemiah's pious advocacy for his people and his city carries over from his role as Judean courtier before the Persian king to his role as governor over the Persian province of Judah. It also, however, ultimately underscores the ideological incompatibility of these genres, just as the goals of the subversive courtier at the mercy of the Persian king are at odds with the goals of the governor representing that king. Early readers of NM responded to these contradictions. A literary investigation of Ezra-Nehemiah reveals that editors of that book incorporated Nehemiah's story, but subtly corrected it, whether by reframing his actions in terms of the work of community as a whole and the Torah (Neh 10, Neh 12:44-13:3) or by contrasting him to the superior reformer Ezra (Ezra 7-10). The book of Ezra-Nehemiah thus mutes the signals sent by NM's use of genre indicating that the authority for Nehemiah's reforms, which were essential to Jerusalem's restoration, derived not from Israelite tradition or from the will of the people, but from the power of Judah's imperial masters.