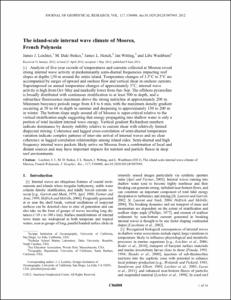 Associate Professor of Oceanography
Research in my lab focuses on fluid dynamics in the coastal ocean and its effects on transport processes. We use field measurements, computational models, and theoretical analyses to understand fundamental physical processes in these systems. We also work extensively on interdisciplinary problems that have a significant physical component to better understand the effects of water motion on the geochemistry, biology, and ecology of shallow marine systems. Much of our research is