Figures in the Shadows: Identities in Artistic Prose from the Anthology of the Elder Seneca 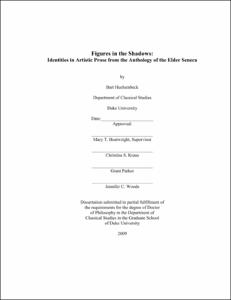 The anthology of the elder Seneca (c. 55 BC - c. 39 AD) contains quotations from approximately 120 speakers who flourished during the early Empire. The predominant tendency in modern scholarship has been to marginalize these speakers and the practice they represent (declamation): they are regarded as a linguistic and literary monolith, and their literary productions while recognized as influential are treated as discrete from those of other, "serious" authors. The present dissertation challenges this viewpoint by focusing on the following questions: To what extent can a speaker quoted in Seneca's anthology be said to have a distinct and unique literary identity? What is the relationship of a speaker, as represented by his quotations, relative to canonical texts?

Since most of the quoted speakers are found exclusively in the anthology, the study first examines the nature of Seneca's work and, more specifically, how the quotations of the anthology are organized. It is discovered that the sequence in which excerpts appear in a quotation do not follow a consistent, meaningful pattern, such as the order in which they might have occurred in a speech. Instead, excerpts exhibit a strong lateral organization: excerpts from one speaker show a close engagement with excerpts in spatially distant quotations from other speakers. A fundamental organizing principle consists in the convergence of excerpts around a limited number of specific points for each declamatory theme.

The remainder, and bulk, of the dissertation is a close analysis of the quotations of two speakers: Arellius Fuscus and Papirius Fabianus. The distinct identities of these speakers emerge from comparisons of excerpts in their quotations with the often studiedly similar excerpts from other speakers and from passages in other texts. Fabianus' literary identity takes shape in a language designed to construct the persona of a philosopher-preacher. The identity of Fuscus resides in idiosyncratic sentence architecture, in a preference for Presentational sentences, and in methodically innovative diction. Further substantiating Fuscus' identity is evidence that he assimilated the language of authors, such as Cicero and Vergil, and established compositional patterns that became authoritative for later authors, such as Ovid, the younger Seneca, and Lucan.