Fossil localities of the Santa Cruz Formation (Early Miocene, Patagonia, Argentina) prospected by Carlos Ameghino in 1887 revisited and the location of the Notohippidian 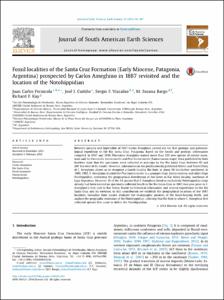 View / Download
5.3 Mb
Date
Authors
Fernicola, JC
Cuitiño, JI
Vizcaíno, SF
Bargo, MS
Kay, RF
Repository Usage Stats
141
views
316
downloads
Abstract
Between January and September of 1887 Carlos Ameghino carried out his first geologic and paleontological expedition to the Río Santa Cruz, Patagonia. Based on the fossils and geologic information compiled, in 1887 and 1889, Florentino Ameghino named more than 120 new species of extinct mammals and his Formación Santacruceña and Piso Santacruceño (Santacrucian stage). Data published by both brothers state that the specimens were collected in outcrops by the Río Santa Cruz, between 90 and 200km west of its mouth. However, information in the posthumously published letters and Travel Diary of C. Ameghino allows us to recognize a fourth locality, Río Bote, at about 50km further southwest. In 1900, 1902, F. Ameghino divided the Piso Santacruceño in a younger étage Santacruzienne and older étage Notohippidéen, restricting the geographical distribution of the latter to Kar Aiken locality, northeast of Lago Argentino. However, 15 of the 54 species that F. Ameghino listed as exclusively Notohippidian stage already had been named on specimens collected South to the Río Santa Cruz in 1887, two year prior to C. Ameghino's first visit to Kar Aiken. Based on historical information and several expeditions to the Río Santa Cruz and its environs, in this contribution we establish the geographical locations of the 1887 localities, formalize their names, evaluate the stratigraphic position of the fossil-bearing levels, and analyze the geographic extension of the Notohippidian, inferring that Río Bote is where C. Ameghino first collected species that came to define the Notohippidian. © 2014 Elsevier Ltd.
Type
Journal article
Permalink
https://hdl.handle.net/10161/10784
Published Version (Please cite this version)
10.1016/j.jsames.2014.02.002
Publication Info
Fernicola, JC; Cuitiño, JI; Vizcaíno, SF; Bargo, MS; & Kay, RF (2014). Fossil localities of the Santa Cruz Formation (Early Miocene, Patagonia, Argentina) prospected by Carlos Ameghino in 1887 revisited and the location of the Notohippidian. Journal of South American Earth Sciences, 52. pp. 94-107. 10.1016/j.jsames.2014.02.002. Retrieved from https://hdl.handle.net/10161/10784.
This is constructed from limited available data and may be imprecise. To cite this article, please review & use the official citation provided by the journal.
Collections
More Info
Show full item record