Biogeography in deep time - What do phylogenetics, geology, and paleoclimate tell us about early platyrrhine evolution? 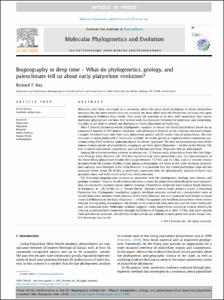 View / Download
3.3 Mb
Date
Author
Kay, Richard Frederick
Repository Usage Stats
259
views
524
downloads
Abstract
Molecular data have converged on a consensus about the genus-level phylogeny of extant platyrrhine monkeys, but for most extinct taxa and certainly for those older than the Pleistocene we must rely upon morphological evidence from fossils. This raises the question as to how well anatomical data mirror molecular phylogenies and how best to deal with discrepancies between the molecular and morphological data as we seek to extend our phylogenies to the placement of fossil taxa. Here I present parsimony-based phylogenetic analyses of extant and fossil platyrrhines based on an anatomical dataset of 399 dental characters and osteological features of the cranium and postcranium. I sample 16 extant taxa (one from each platyrrhine genus) and 20 extinct taxa of platyrrhines. The tree structure is constrained with a "molecular scaffold" of extant species as implemented in maximum parsimony using PAUP with the molecular-based 'backbone' approach. The data set encompasses most of the known extinct species of platyrrhines, ranging in age from latest Oligocene (∼26 Ma) to the Recent. The tree is rooted with extant catarrhines, and Late Eocene and Early Oligocene African anthropoids. Among the more interesting patterns to emerge are: (1) known early platyrrhines from the Late Oligocene through Early Miocene (26-16.5Ma) represent only stem platyrrhine taxa; (2) representatives of the three living platyrrhine families first occur between 15.7 Ma and 13.5 Ma; and (3) recently extinct primates from the Greater Antilles (Cuba, Jamaica, Hispaniola) are sister to the clade of extant platyrrhines and may have diverged in the Early Miocene. It is probable that the crown platyrrhine clade did not originate before about 20-24 Ma, a conclusion consistent with the phylogenetic analysis of fossil taxa presented here and with recent molecular clock estimates. The following biogeographic scenario is consistent with the phylogenetic findings and climatic and geologic evidence: Tropical South America has been a center for platyrrhine diversification since platyrrhines arrived on the continent in the middle Cenozoic. Platyrrhines dispersed from tropical South America to Patagonia at ∼25-24 Ma via a "Paraná Portal" through eastern South America across a retreating Paranense Sea. Phylogenetic bracketing suggests Antillean primates arrived via a sweepstakes route or island chain from northern South America in the Early Miocene, not via a proposed land bridge or island chain (GAARlandia) in the Early Oligocene (∼34 Ma). Patagonian and Antillean platyrrhines went extinct without leaving living descendants, the former at the end of the Early Miocene and the latter within the past six thousand years. Molecular evidence suggests crown platyrrhines arrived in Central America by crossing an intermittent connection through the Isthmus of Panama at or after 3.5Ma. Any more ancient Central American primates, should they be discovered, are unlikely to have given rise to the extant Central American taxa in situ.
Type
Journal article
Subject
Anthropoidea
Miocene
Oligocene
Paraná Portal
Platyrrhini
South America
Animals
Biological Evolution
Caribbean Region
Central America
Climate
Fossils
Geology
Phylogeny
Platyrrhini
Sequence Analysis, DNA
Skull
South America
Permalink
https://hdl.handle.net/10161/10785
Published Version (Please cite this version)
10.1016/j.ympev.2013.12.002
Publication Info
Kay, Richard Frederick (2015). Biogeography in deep time - What do phylogenetics, geology, and paleoclimate tell us about early platyrrhine evolution?. Mol Phylogenet Evol, 82 Pt B. pp. 358-374. 10.1016/j.ympev.2013.12.002. Retrieved from https://hdl.handle.net/10161/10785.
This is constructed from limited available data and may be imprecise. To cite this article, please review & use the official citation provided by the journal.
Collections
More Info
Show full item record