"A Weapon as Powerful as the Vote": Street Protest and Electoral Politics in Caracas, Venezuela before Hugo Chavez 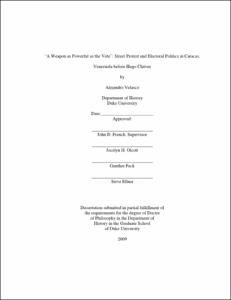 On 23 January 1958, Marcos PÃ©rez JimÃ©nez was ousted in a "democratic revolution" whose emblematic images featured a vast public housing project built by the dictator in the heart of in downtown Caracas, next to the Presidential Palace, Ministry of Defense, and Congress. Officially named "2 December" to memorialize the coup that consolidated his rule, the neighborhood and its residents suffered harshly was renamed the "23 January" (23 de enero) in honor of the 1958 revolution. This study investigates the relationship between this parish and the Venezuelan democratic system that would, over the following decades, be praised for its stability and was believed to have made the urban popular sectors dependent on party and state. This study disrupts such an interpretation by exploring how oppositional politics, forms of street protest, and voting combined to produce evolving understandings of political participation and legitimate contestation.

Three key moments anchor the story told in this dissertation: the transition to electoral democracy during the 1958 revolution and its aftermath; the late 1970s and early 1980s period of structural crisis that lead to dramatic seizures of public vehicles; and the 1989 Caracazo massacre in which Venezuela's newly elected President shocked the nation by ending the country's largest urban protest with a massacre that killed hundreds. The dissertation ends with reflections on the continuity of in political and protest behavior in el 23 under former military rebel Hugo Chávez who was elected to the presidency in 1998. While the urban popular sectors' are depicted by some as having been awoken to national politics under Chavez, this study establishes powerful continuities going back to 1958 in this stronghold of Chavez's "Bolivarian Revolution."

A comprehensive and systematic canvas of thirty years' of newspaper and periodical sources on el 23 provides a firm foundation for the narrative. It also draws on primary sources from the Banco Obrero, the US National Archives, and the Inter-American Court of Human Rights, while making extensive use of polling data and electoral statistics from 1958 to 1989. This archival work allowed for the success of extensive oral histories and ethnographic observation carried out in the 23 de enero over ten months between 2004 and 2005.