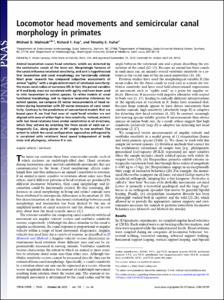 View / Download
1020.3 Kb
Date
Authors
Malinzak, Michael D
Kay, Richard F
Hullar, Timothy E
Repository Usage Stats
145
views
158
downloads
Abstract
Animal locomotion causes head rotations, which are detected by the semicircular canals of the inner ear. Morphologic features of the canals influence rotational sensitivity, and so it is hypothesized that locomotion and canal morphology are functionally related. Most prior research has compared subjective assessments of animal "agility" with a single determinant of rotational sensitivity: the mean canal radius of curvature (R). In fact, the paired variables of R and body mass are correlated with agility and have been used to infer locomotion in extinct species. To refine models of canal functional morphology and to improve locomotor inferences for extinct species, we compare 3D vector measurements of head rotation during locomotion with 3D vector measures of canal sensitivity. Contrary to the predictions of conventional models that are based upon R, we find that axes of rapid head rotation are not aligned with axes of either high or low sensitivity. Instead, animals with fast head rotations have similar sensitivities in all directions, which they achieve by orienting the three canals of each ear orthogonally (i.e., along planes at 90° angles to one another). The extent to which the canal configuration approaches orthogonality is correlated with rotational head speed independent of body mass and phylogeny, whereas R is not.
Type
Journal article
Subject
Animals
Biomechanical Phenomena
Head Movements
Locomotion
Primates
Semicircular Canals
Permalink
https://hdl.handle.net/10161/10790
Published Version (Please cite this version)
10.1073/pnas.1206139109
Publication Info
Malinzak, Michael D; Kay, Richard F; & Hullar, Timothy E (2012). Locomotor head movements and semicircular canal morphology in primates. Proc Natl Acad Sci U S A, 109(44). pp. 17914-17919. 10.1073/pnas.1206139109. Retrieved from https://hdl.handle.net/10161/10790.
This is constructed from limited available data and may be imprecise. To cite this article, please review & use the official citation provided by the journal.
Collections
More Info
Show full item record Medical Instructor in the Department of Radiology
Alphabetical list of authors with Scholars@Duke profiles.