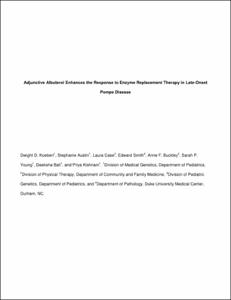 Assistant Professor of Pathology
My basic research focus is on neurogenic stem cells and their involvement in brain development and brain tumors. I work in mouse models using inducible in vivo genetic systems, live imaging, and tissue culture, in addition to histological and biochemical methods. My clinical research interests include neuromuscular diseases. I collaborate with colleagues at Duke on basic and translational research in this area. Chen Family Distinguished Professor of Pediatrics
RESEARCH INTERESTS A multidisciplinary approach to care of individuals with genetic disorders in conjunction with clinical and bench research that contributes to: 1) An understanding of the natural history and delineation of long term complications of genetic disorders  with a special focus on liver Glycogen storage disorders, lysosomal disorders witha special focus on Pompe disease, Down syndrome and hypophosphatasia2) The development of new therapies for genetic d Professor of Pediatrics
The focus of our research has been the development of gene therapy with  adeno-associated virus (AAV) vectors, most recently by genome editing with CRISPR/Cas9. We have developed gene therapy for inherited disorders of metabolism, especially glycogen storage disease (GSD) and phenylketonuria (PKU). 1) GSD type Ia: Glucose-6-phosphatase (G6Pase) deficient animals provide models for developing new therapy for GSD type Ia, although early mortality complicates research with both Professor of Pediatrics
As a clinical biochemical geneticist and a director of the Duke Biochemical Genetics laboratory, my research interests are focused on improving laboratory diagnostics for rare inherited disorders of metabolism. I am actively involved in the development of assays using mass spectrometry and other analytical techniques. My current research on biomarkers for lysosomal storage disorders, such as Fabry and Pompe disease and the mucopolysaccharidoses includes monitoring the response to novel ther
More Authors
Alphabetical list of authors with Scholars@Duke profiles.