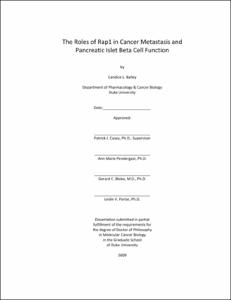 Signaling from the G protein, Rap1 is involved in several fundamental biological processes. Yet the mechanism or even consequence of Rap1 signaling in several biologies and diseases is still unclear. Rap1 has been implicated in cancer tumorigenesis, but its role in cancer invasion and metastasis is less understood. Rap1 signals to pathways involved in cell adhesion, migration, and survival, suggesting that Rap1 may promote several processes associated with metastasis. Recent studies in another biological system have demonstrated that the Rap activator proteins, Epac, are important regulators of pancreatic &beta;-cell insulin secretion. However, the role of Rap1 in &beta;-cell biology has not yet been defined. Here we established roles for Rap1 in distinct signaling events and begin to answer some of the key questions about Rap1 function in two diverse biologies: cancer metastasis and pancreatic islet &beta;-cell function.

In a seperate biological system, the effects of Rap1 signaling on pancreatic &beta;-cells was directly examined. Activation of Rap1 was demonstrated to promote ribosomal protein S6 phosphorylation through the mTOR and p70 S6 kinase (S6K1) pathway, a known growth-regulatory pathway. This newly defined &beta;-cell axis acts downstream of cAMP, in parallel with the stimulation of both Epac and PKA. Like previous studies on Epac, activation of Rap1 indeed increased glucose stimulated insulin secretion (GSIS) from rat islet &beta;-cells; however, Rap1-mediated GSIS did not appear to signal through this new S6 pathway. Interestingly, Rap1 was show to significantly increase islet cell proliferation and this indeed occured through signaling to mTOR and S6. In summary, these findings represent a new link between cAMP signaling and the pathways controlling &beta;-cell proliferation, and suggest that directly targeting this pathway may have beneficial therapeutic effects for patients with Type 2 diabetes. Furthermore, an additional benefit to targeting Rap1 signaling is the potentiation of insulin secretion, which could possibly prevent or reverse &beta;-cell dysfunction (i.e., defects in both &beta;-cell mass and insulin secretory capacity) in diabetes.