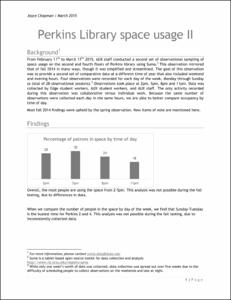 View / Download
226.6 Kb
Date
Author
Chapman, Joyce
Repository Usage Stats
231
views
96
downloads
Abstract
From February 11th to March 17th 2015, AUX staff conducted a second set of observational sampling of space usage on the second and fourth floors of Perkins library using Suma.2 This observation mirrored that of fall 2014 in many ways, though it was simplified and streamlined. The goal of this observation was to provide a second set of comparative data at a different time of year that also included weekend and evening hours. Four observations were recorded for each day of the week, Monday through Sunday (a total of 28 observational sessions).3 Observations took place at 2pm, 5pm, 8pm and 11pm. Data was collected by Edge student workers, AUX student workers, and AUX staff. The only activity recorded during this observation was collaborative versus individual work. Because the same number of observations were collected each day in the same hours, we are able to better compare occupancy by time of day. Most fall 2014 findings were upheld by the spring observation. New items of note are mentioned here.
Type
Report
Subject
AUX - observational/wayfinding study
Permalink
https://hdl.handle.net/10161/10817
Citation
Chapman, Joyce (2015). Perkins Library space usage II - April 2015. Retrieved from https://hdl.handle.net/10161/10817.
Collections
More Info
Show full item record