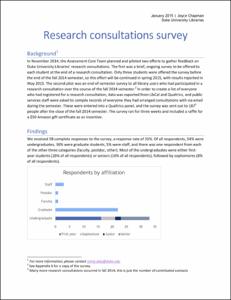 View / Download
415.2 Kb
Date
Author
Chapman, Joyce
Repository Usage Stats
214
views
101
downloads
Abstract
In November 2014, the Assessment Core Team planned and piloted two efforts to gather feedback on Duke University Libraries’ research consultations. The first was a brief, ongoing survey to be offered to each student at the end of a research consultation. Only three students were offered the survey before the end of the fall 2014 semester, so this effort will be continued in spring 2015, with results reported in May 2015. The second pilot was an end-of-semester survey to all library users who had participated in a research consultation over the course of the fall 2014 semester.2 In order to create a list of everyone who had registered for a research consultation, data was exported from LibCal and Qualtrics, and public services staff were asked to compile records of everyone they had arranged consultations with via email during the semester. These were entered into a Qualtrics panel, and the survey was sent out to 1873 people after the close of the fall 2014 semester. The survey ran for three weeks and included a raffle for a $50 Amazon gift certificate as an incentive.
Type
Report
Subject
AUX - survey
Permalink
https://hdl.handle.net/10161/10820
Citation
Chapman, Joyce (2015). Research consultations survey - fall 2014. Retrieved from https://hdl.handle.net/10161/10820.
Collections
More Info
Show full item record