Design and Evaluation of a Transcutaneous Energy Transfer System 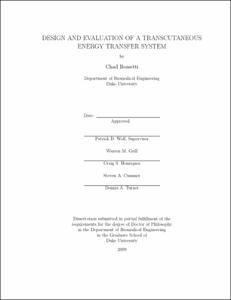 A clinically viable brain-machine interface (BMI) requires a fully-implanted wireless neural acquisition system to limit the impediments of percutaneous connections. For an implanted system with an appreciable telemetry range, and where significant

neural signal processing is performed continuously, a major obstacle for clinical application is the need for a power source. Existing battery technology and wireless power delivery systems have not addressed the need for a mid-range power supply, capable

of 1-3 W delivery, that limits both induced noise and temperature rise. These factors are crucial for the succesful operation of a fully-implanted neural acquisition system. This work seeks to fill this void, and presents both a wireless power solution suitable for a neural recording device, and a system capable of real time monitoring of tissue temperature rise.

and reasonable efficiency. The design of the primary circuit consists of an H-bridge switching network driving a planar spiral Litz wire primary coil. The primary also incoporates a novel circuit for detecting the presence of the secondary. The implanted secondary components include a complimentary planar spiral coil connected to a voltage doubling rectifier. The key approach to mitigating axial coil misalignments was the use of step-down switching regulators in the secondary. With this approach, link efficiency remained nearly constant at 40%, for axial coil displacements of up to 2 cm.

Noise in the recorded neural signals was minimized using two techniques. First, the 250 kHz operating frequency of the system was tuned, such that the aliased harmonics of the switching frequency lay above the bandwidth of the amplifier used for neural recording. The second approach was to limit the impact of induced displacement currents in the body by physically separating the recording front end from the power supply components. A large titanium enclosure was used to house some of the secondary electronics, and provided a low impedance return path for further

Limiting the temperature rise of internal components was also a critical design constraint. The need for real time temperature information led to the design of a six channel temperature measurement system and incorporation of the temperature data into the acquisition system data transmission scheme. This system consisted of bead thermistor temperature transducers, and an off-the-shelf microcontroller with a built-in instrumentation amplifier.

The TETS and temperature system was fully tested in an ovine model during several acute studies. Recorded temperature rise was limited to approximately 5.5&deg C when the system was implanted at an adequate depth in muscle. The TETS was able to successfully power the 2 W neural acquisition system during a data processing task. Received rectified voltage in the secondary ranged from 14.86 V to 20.2 V, while link efficiency remained virtually constant. Acquired neural data was examined for TETS switching noise. The measured RMS noise increased by less than 1 &mu V, averaged over several experiments. These results demonstrate the first mid-range TETS solution for powering a fully implanted neural acquisition system.