Kinematic and dynamic gait compensations resulting from knee instability in a rat model of osteoarthritis. 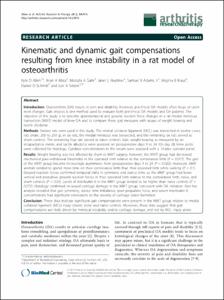 Professor in the Department of Evolutionary Anthropology
My primary interest is in the evolution of primate locomotion. I am studying the mechanics of movement in primates and other vertebrates in the laboratory to understand the relationship between movement and postcranial morphology, and the unique nature of primates among mammals. Current projects include the origins of primate locomotion and the evolution of vertebrate bipedalism.

Adjunct Professor of Biomedical Engineering
Research in Setton's laboratory is focused on the role of mechanical factors in the degeneration and repair of soft tissues of the musculoskeletal system, including the intervertebral disc, articular cartilage and meniscus. Work in the Laboratory is focused on engineering and evaluating materials for tissue regeneration and drug delivery. Studies combining engineering and biology are also used to determine the role of mechanical factors to promote and control healing of cartilaginous tissues. Re
More Authors
Alphabetical list of authors with Scholars@Duke profiles.