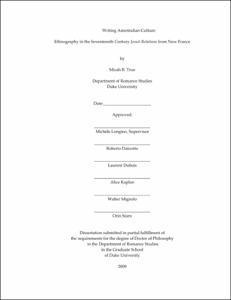 This dissertation examines ethnographic writing in the Jesuit Relations, a set of annual reports from missionaries in New France to Society of Jesus authorities in France that were published and widely read from 1632 to 1673. Drawing on currents in cultural anthropological thought about the complex relationship between anthropologists, their subjects, and the texts they produce, I analyze how the Relations allowed Jesuit missionaries to define for French readers Amerindian cultures, European-Amerindian interactions, and the health and success of the colony and the mission for forty years, almost without competition, giving them extraordinary influence over perceptions of the Amerindian Other at the very moment that France's interest therein was being piqued by an increasing awareness of the world outside of Europe. The texts now are lauded as the première source of information on the Algonquian and Iroquoian groups with which the Jesuits were in contact in seventeenth century New France. In this dissertation, I examine the ways Jesuits conveyed information about Amerindian groups, focusing on the rhetorical aspects of their accounts that have been largely ignored by social scientists who have mined the texts for data. Instead of considering the Relations as a collection of facts recorded by diligent field workers, I seek to understand them as texts that reflect multiple points of view and the political, religious, and intellectual pressures acting on their French Catholic authors. Were Amerindians human? If so, were they created in Eden along with the ancestors of Europeans? How could one explain their presence in America, with little apparent knowledge of their origins? And if they were human and of the same stock as European Christians, how could one explain the fact that their beliefs and behavior were so different from those of their French Christian interlocutors? These questions, I argue, left an enduring mark on the Jesuits' descriptions of Amerindian cultures, making their texts less the work of proto-anthropologists than a form of intellectual colonization.