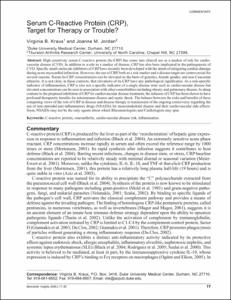 View / Download
376.3 Kb
Date
Authors
Kraus, Virginia B
Jordan, Joanne M
Repository Usage Stats
98
views
55
downloads
Abstract
High sensitivity serum C-reactive protein (hs-CRP) has come into clinical use as a marker of risk for cardiovascular disease (CVD). In addition to a role as a marker of disease, CRP has also been implicated in the pathogenesis of CVD. Specific small-molecule inhibitors of CRP have recently been developed with the intent of mitigating cardiac damage during acute myocardial infarction. However, the use of CRP, both as a risk marker and a disease target are controversial for several reasons. Serum hs-CRP concentrations can be elevated on the basis of genetics, female gender, and non-Caucasian ethnicity. It is not clear, in these contexts, that elevations of hs-CRP have any pathological significance. As a non-specific indicator of inflammation, CRP is also not a specific indicator of a single disease state such as cardiovascular disease but elevated concentrations can be seen in association with other comorbidities including obesity and pulmonary disease. In sharp contrast to the proposed inhibition of CRP for cardiovascular disease treatment, the infusion of CRP has been shown to have profound therapeutic benefits for autoimmune disease and septic shock. The balance between the risks and benefits of these competing views of the role of CRP in disease and disease therapy is reminiscent of the ongoing controversy regarding the use of non-steroidal anti-inflammatory drugs (NSAIDs) for musculoskeletal disease and their cardiovascular side effects. Soon, NSAIDs may not be the only agents about which Rheumatologists and Cardiologists may spar.
Type
Journal article
Subject
C-reactive protein
cardiovascular disease risk
inflammation
osteoarthritis
Permalink
https://hdl.handle.net/10161/10880
Collections
More Info
Show full item record