Polyclonal B cell differentiation and loss of gastrointestinal tract germinal centers in the earliest stages of HIV-1 infection. 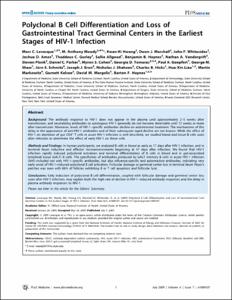 Consulting Associate in the School of Nursing
I am a Postdoctoral Fellow with the National Clinician Scholars Program. My research interests are in the integration of the Community Health Worker workforce into primary care settings while maintaining the unique qualities and strengths of CHWs. Adjunct Professor in the Department of Medicine
Dr. Liao is a Professor of Medicine and Research Director of Duke Human Vaccine Institute. Dr. Liao is a MD virologistt rained in China. In early 1980&#8217;s, Dr. Liao made major contributions to the first isolation of epidemic hemorrhagic fever virus (hataanvirus) from Apodemus agraius using tissue culture in China. The successful identification and isolation of Hataanvirus enabled the early diagnosis and treatment of the disease, and advancement of HFRS research towards prevention by de Associate Professor of Pediatrics
Tony Moody, MD is an Associate Professor in the Department of Pediatrics, Division of Infectious Diseases and the Department of Immunology at Duke University Medical Center. Research in the Moody lab is focused on understanding the B cell responses during infection, vaccination, and disease. The lab has become a resource for human phenotyping, flow characterization, staining and analysis at the Duke Human Vaccine Institute (DHVI). The Moody lab is currently funded to study influenza, syphilis Assistant Professor of Medicine
Biological aging is the greatest risk factor for most chronic diseases, including frailty and dementia. The geroscience hypothesis posits that interventions that target aspects of biological aging may delay or prevent many of these diseases simultaneously. My research centers on understanding the mechanisms of interventions that affect biological aging, like exercise training and caloric restriction and using that understanding to develop therapies that maintain cognitive and physical function i Professor in Surgery
Research in the Tomaras Laboratory in the Duke Human Vaccine Institute and Departments of Surgery, Immunology, and Molecular Genetics and Microbiology at Duke University Medical Center, focuses on the identification of immune correlates of protection for preventative vaccines and identification of the mechanisms responsible for potent inhibition of human pathogens.