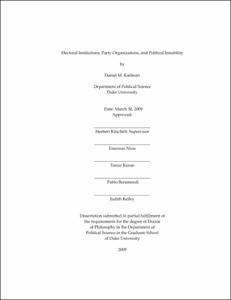 A majority of formal theoretic research in political science treats political parties as unitary actors, and endows them with decision-making powers not unlike those of strategic individuals. This is true both of most research in the spatial-theoretic tradition, as well as most game theoretic research in the field of comparative political-economy. In contrast, my dissertation examines strategic equilibria which arise when competition takes place simultaneously within parties over organizational control and between parties over political office. I first distinguish between three intra-organizational elements: a party's parliamentary group, its activist cadre, and its executive leaders. Chapters 2-4 develop a set of foundational game theoretic models which identify the equilibrium balance of power among these 3 organizational elements as a function of a country's electoral institutions and voters' relative responsiveness to marginal policy changes. In turn, this more complete understanding of intra-party competition sheds light on a number of important questions in comparative politics and comparative political-economy. For example, it helps to identify conditions under which Downsian vote-maximization is in fact a viable assumption in spatial theoretic models; conditions under which Duverger's argument that proportional representation (PR) should tend to generate multi-party competition may not apply; and, in contrast to Lijphart's famous argument, conditions under which PR may instigate rather than mediate social conflict. Ten months of intensive field research conducted in Turkey provide both the quantitative and the qualitative data which constitute the dissertation's most basic empirical material. This data includes primary and secondary source material on the history of intra-organizational competition in Turkey; observational and informant-based information on contemporary Turkish politics and the events of 2006-2008; and a data set of over 4,000 observations on party-switching in the Turkish Parliament (1987-2007).