Remote Sensing of Fire, Flooding, and White Sand Ecosystems in the Amazon 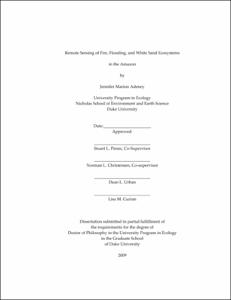 Human and natural disturbance affect the Amazon basin at several spatial and temporal scales. In this thesis, I used satellite-detected hot pixels to examine patterns of human-caused disturbance and protected areas in the Brazilian Amazon from 1996-2006. Deforestation fires, as measured by hot pixels, declined exponentially with increasing distance from roads. Fewer deforestation fires occurred within protected areas than outside and this difference was greatest near roads. However, even within reserves, more deforestation fires occurred in regions with high human impact than in those with lower impact. El Niño-related droughts affected deforestation fires most outside of reserves and near roads. There was no significant difference in fire occurrence among inhabited and uninhabited reserve types.

Within this context of disturbance in the Brazilian Amazon basin, I examined relatively undisturbed savanna-like `campina' ecosystems. I reviewed the literature on campinas and discussed their variation and their significance for beta diversity. As one of two case studies, I assessed spatio-temporal patterns of disturbance (fire and blowdowns), and vegetation change from 1987 to 2007 in campinas in the central Brazilian Amazon using Landsat imagery. In 2001 images, an increase in open areas corresponded with significantly more visible signs of disturbance, likely precipitated by the 1997-98 El Niño. Bird community data indicated a trend of more generalist/savanna species in more frequently disturbed campinas.

Campina ecosystems are an important, but largely overlooked, component of the biodiversity of the Amazon basin. My research shows that climate, particularly ENSO-associated droughts, strongly affects campinas even in remote areas, just as it increases fire frequencies in more populated regions of the Amazon.