Allopregnanolone Levels Are Inversely Associated with Self-Reported Pain Symptoms in U.S. Iraq and Afghanistan-Era Veterans: Implications for Biomarkers and Therapeutics. 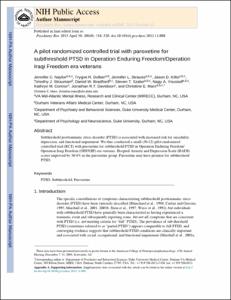 Professor in Psychiatry and Behavioral Sciences
The primary aim of our research over the past year has been to evaluate the efficacy of cognitive-behavioral treatments for arthritis pain. We are conducting two treatment outcome studies supported by grants from the National Institute of Arthritis, Musculoskeletal, and Skin Diseases. The first project, conducted with osteoarthritis patients, seeks to determine whether aerobic exercise training can enhance the effects of a cognitive behavior therapy (CBT) intervention for managing pain an Assistant Professor of Psychiatry and Behavioral Sciences
Dr. Szabo received his undergraduate degree from the University of New Hampshire at Plymouth and earned his PhD in Neurosciences at McGill University.  He completed postdoctoral training in Psychopharmacology at the University of Florida and in Mood and Anxiety Disorders at NIMH before earning his medical degree from the Medical University of the Americas.  He completed his psychiatry residency training at Duke before joining the faculty in 2013.  As a substance abuse counselor Associate Consulting Professor in the Department of Psychiatry and Behavioral Sciences
My principal research interest concerns brain-behavior relationships, both in normals and in psychiatric populations. Methods of study include magnetic resonance imaging (MRI) and spectroscopy (MRS), neuropsychological investigations, psychopharmacological studies, cognitive-science paradigms, and methodological inquiries. More specifically, topics of interest include lesion and morphometric studies of discrete brain regions as they relate to cognitive and ot Associate Professor of Psychiatry and Behavioral Sciences
My research career into neurobiology and mental health spans two distinct phases. The first includes doctoral training at the University of New Mexico in psychology and neurobiology with a major area of emphasis in behavioral neurobiology and two minor areas of emphasis in learning and memory and statistics and experimental design.  Doctoral training was subsequently supplemented with  postdoctoral study in neuropharmacology at Duke University focusing on brain monoamine systems.&nb
More Authors
Alphabetical list of authors with Scholars@Duke profiles.