Differential developmental trajectories of magnetic susceptibility in human brain gray and white matter over the lifespan. 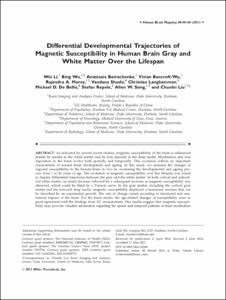 View / Download
975.4 Kb
Date
Authors
Li, Wei
Wu, Bing
Batrachenko, Anastasia
Bancroft-Wu, Vivian
Morey, Rajendra A
Shashi, Vandana
Langkammer, Christian
De Bellis, Michael D
Ropele, Stefan
Song, Allen W
Liu, Chunlei
Show More
(11 total)
Repository Usage Stats
178
views
158
downloads
Abstract
As indicated by several recent studies, magnetic susceptibility of the brain is influenced mainly by myelin in the white matter and by iron deposits in the deep nuclei. Myelination and iron deposition in the brain evolve both spatially and temporally. This evolution reflects an important characteristic of normal brain development and ageing. In this study, we assessed the changes of regional susceptibility in the human brain in vivo by examining the developmental and ageing process from 1 to 83 years of age. The evolution of magnetic susceptibility over this lifespan was found to display differential trajectories between the gray and the white matter. In both cortical and subcortical white matter, an initial decrease followed by a subsequent increase in magnetic susceptibility was observed, which could be fitted by a Poisson curve. In the gray matter, including the cortical gray matter and the iron-rich deep nuclei, magnetic susceptibility displayed a monotonic increase that can be described by an exponential growth. The rate of change varied according to functional and anatomical regions of the brain. For the brain nuclei, the age-related changes of susceptibility were in good agreement with the findings from R2* measurement. Our results suggest that magnetic susceptibility may provide valuable information regarding the spatial and temporal patterns of brain myelination and iron deposition during brain maturation and ageing.
Type
Journal article
Subject
brain development and aging
brain iron
myelination
quantitative susceptibility mapping
Adolescent
Adult
Aged
Aged, 80 and over
Aging
Brain
Cerebral Palsy
Child
Child, Preschool
Female
Gray Matter
Human Development
Humans
Infant
Magnetic Phenomena
Magnetic Resonance Imaging
Male
Middle Aged
Models, Neurological
Retrospective Studies
White Matter
Young Adult
Permalink
https://hdl.handle.net/10161/10981
Published Version (Please cite this version)
10.1002/hbm.22360
Publication Info
Li, Wei; Wu, Bing; Batrachenko, Anastasia; Bancroft-Wu, Vivian; Morey, Rajendra A; Shashi, Vandana; ... Liu, Chunlei (2014). Differential developmental trajectories of magnetic susceptibility in human brain gray and white matter over the lifespan. Human Brain Mapping, 35(6). pp. 2698-2713. 10.1002/hbm.22360. Retrieved from https://hdl.handle.net/10161/10981.
This is constructed from limited available data and may be imprecise. To cite this article, please review & use the official citation provided by the journal.
Collections
More Info
Show full item record Professor of Psychiatry and Behavioral Sciences
This author no longer has a Scholars@Duke profile, so the information shown here reflects their Duke status at the time this item was deposited. Professor of Pediatrics
Undiagnosed and rare diseases cause significant emotional and financial distress to patients who suffer from these and their families. Duke is one of seven clinical sites to be part of the NIH Undiagnosed Diseases Network (UDN). As a principal investigator for the Duke UDN site, I am involved in arranging detailed clinical evaluation for children and adults with undiagnosed diseases and in the interpretation of the genome sequencing that is performed as part of the initiative to obtain Professor in Radiology
The research in our lab is concerned with advancing structural and functional MRI methodologies (e.g. fast and high-resolution imaging techniques) for human brain imaging. We also aim to improve our understanding of functional brain signals, including spatiotemporal characterizations of the blood oxygenation level dependent contrast and alternative contrast mechanisms that are more directly linked to the neuronal activities. Additional effort is invested in applying and validating the de
More Authors
Alphabetical list of authors with Scholars@Duke profiles.