Costs and Benefits of Intrasexual Aggression in Females: an Experimental Approach 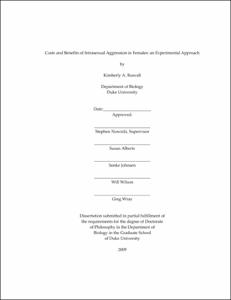 A long-held assumption in animal behavior is that females and males differ fundamentally in their mating strategies. Females are thought to be more choosy because female reproduction typically is limited by parental investment. Males, on the other hand, are expected to compete among themselves for access to females or resources, since male reproduction is limited primarily by mating access. This dichotomy is challenged by the increasing realization that males can be choosy and females also compete aggressively. It remains unclear, however, if and how selection acts on aggressive behavior in the context of intrasexual competition among females (reviewed in Chapter 1). In this thesis, I use a population of free-living tree swallows (<i>Tachycineta bicolor<i>) to test predictions about the selective pressures shaping aggressive behavior in females. First, using an experimental manipulation of nest site availability, I demonstrate that more aggressive females have a competitive edge in acquiring nestboxes, a critical limiting resource required for breeding (Chapter 2). This result shows that more aggressive females are more likely to breed and, thus, that females experience direct selection to be aggressive in the context of competition for mating opportunities. Next, I demonstrate a fitness cost of female aggression (Chapter 3): high levels of aggression in females are not associated with the quantity of offspring, but instead, more aggressive females had offspring of lower quality (i.e. reduced mass). Using a cross-fostering approach, I explore the causal link between female aggression and offspring mass, and I find that a trade-off between female aggression and maternal care best accounts for this cost of aggression. Site differences may create variation in how selection shapes female aggression, but the overall finding that more aggressive females have lower quality offspring indicates that this cost may work counter to selection favoring aggressive behavior in the context of competition over nestboxes. Understanding the evolution of female aggressiveness in a biparental system is incomplete without examining how males may alter the selective environment shaping female behavior. In Chapter 4, I explore the potential role of a female's mate in offsetting the costs of aggression. Males appear to mitigate these costs for their female partners, but not by compensating for poor parenting by aggressive females. Instead, females invest more heavily in reproduction, laying more and larger eggs, when mated to a male that is more different from her own phenotype. If this differential investment outweighs the cost of aggressiveness in terms of offspring quality, then male phenotype may play a key role in understanding the selective pressures shaping the evolution of aggressive behavior in females. Altogether, this dissertation explores the costs and benefits of female aggressive behavior. The focus on aggressiveness as a sexually selected trait in females provides a much needed parallel to the wealth of information already known about the selective pressures shaping sexually selected traits in males.