Exoplanet Detection: a Comparison of Three Statistics or How Long Should It Take to Find a Small Planet? 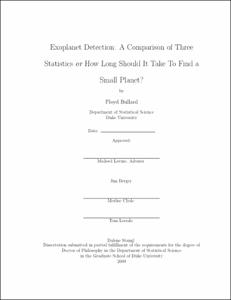 If a distant star happens to host an orbiting exoplanet, then that planet will exert a gravitational influence on the star that may be detectable from the earth by the apparent ``stellar wobble''---regular, periodic variations in the observed radial velocities. Two complicating factors, however are ``stellar jitter'' and measurement errors, both of which generate radial velocity ``noise''. As a result, it is not always obvious whether variations in radial velocities are due to an orbiting planet or to mere noise. The problem of model selection---is that a planet or not?---may be addressed by using any number of summary statistics, and the choice may be made using frequentist hypothesis testing, Bayesian model selection, or likelihood analysis.

Here we compare the planet-detecting ability of three different statistics: the ``Maximal Periodogram Spike'', or the height of the tallest spike in the Lomb-Scargle periodogram; the Maximum Likelihood Ratio; and the Bayes Factor. We measure the usefulness of each statistic by how many observations would be required before the statistic would able to distinguish accurately the no-planet model from the one-planet model when presented with data from a star hosting a planet of one of six different types---we vary the magnitude of the radial velocity function's semi-amplitude and the eccentricity of the orbit. The data are simulated, using observations made at random times.

We find that the current practice of examining the tallest spike in the periodogram cannot easily be improved upon using either the Maximum Likelihood Ratio (which performs comparably) or the Bayes Factor (which is exceedingly difficult to estimate for eccentric orbits unless it is already plain that a planet is present). We also conclude that a planet having a semiamplitude of 3 m/s (which could potentially correspond to the smallest planet yet discovered outside of a multi-planet system) could in fact be detected using current methods, if there was an initial commitment to make at least 150 or 200 radial velocity observations on the same candidate star, even in the absence of growing evidence for planetary presence.