Pulmonary vein isolation for the treatment of drug-refractory atrial fibrillation in adults with congenital heart disease. 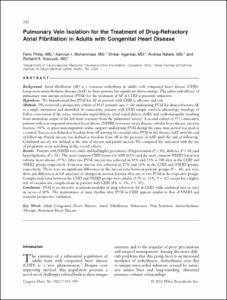 View / Download
314.4 Kb
Date
Authors
Philip, Femi
Muhammad, Kamran I
Agarwal, Shikar
Natale, Andrea
Krasuski, Richard A
Repository Usage Stats
168
views
236
downloads
Abstract
BACKGROUND: Atrial fibrillation (AF) is a common arrhythmia in adults with congenital heart disease (CHD). Long-term antiarrhythmic therapy (AAT) in these patients has significant shortcomings. The safety and efficacy of pulmonary vein antrum isolation (PVAI) for the treatment of AF in CHD is presently unknown. HYPOTHESIS: We hypothesized that PVAI for AF in patients with CHD is effective and safe. METHODS: We reviewed a prospective cohort of 4315 patients (age ≥ 18) undergoing PVAI for drug refractory AF at a single institution and identified 36 consecutive patients with CHD (single ventricle physiology, tetralogy of Fallot, coarctation of the aorta, ventricular septal defects, atrial septal defects (ASD) and cardiomyopathy resulting from anomalous origin of the left main coronary from the pulmonary artery). A second cohort of 355 consecutive patients with noncongenital structural heart disease (NSHD) (coronary artery disease, valvular heart disease, ejection fraction <50%, or prior noncongenital cardiac surgery) undergoing PVAI during the same time period was used as a control. Success was defined as freedom from AF starting two months after PVAI in the absence AAT until the end of follow-up. Partial success was defined as freedom from AF in the presence of AAT until the end of follow-up. Combined success was defined as the sum of success and partial success. We compared the outcomes with the use of propensity-score matching in the overall cohort. RESULTS: Patients with NSHD were older and had higher prevalence of hypertension (P < .01), diabetes (P < .01) and hyperlipidemia (P < .01). The most common CHD lesion was ASD (61%) and the most common NSHD lesion was valvular heart disease (57%). After one PVAI, success was achieved in 42% and 53% at 300 days in the CHD and NSHD groups respectively. Four-year success was achieved in 27% and 36% in the CHD and NSHD groups, respectively. There were no significant differences in the success rates between patients groups (P= .46), nor were there any differences in left atrial size or changes in ejection fraction after one or two PVAI in the respective groups. Complication rates between the CHD and NSHD groups were similar (15% vs. 11%, P= .42) except for a higher risk of vascular site complications in patients with CHD (8% vs. 1%, P < .05). CONCLUSION: PVAI is an attractive treatment modality in drug refractory AF in CHD, with combined success rates in excess of 60%. The maintenance of sinus rhythm after PVAI in CHD appears similar to that of NSHD and warrants prospective validation.
Type
Journal article
Subject
Atrial Fibrillation
Cardiac Surgical Procedures
Female
Heart Diseases
Humans
Male
Middle Aged
Pulmonary Veins
Retrospective Studies
Treatment Failure
Permalink
https://hdl.handle.net/10161/11013
Published Version (Please cite this version)
10.1111/j.1747-0803.2012.00649.x
Publication Info
Philip, Femi; Muhammad, Kamran I; Agarwal, Shikar; Natale, Andrea; & Krasuski, Richard A (2012). Pulmonary vein isolation for the treatment of drug-refractory atrial fibrillation in adults with congenital heart disease. Congenit Heart Dis, 7(4). pp. 392-399. 10.1111/j.1747-0803.2012.00649.x. Retrieved from https://hdl.handle.net/10161/11013.
This is constructed from limited available data and may be imprecise. To cite this article, please review & use the official citation provided by the journal.
Collections
More Info
Show full item record