Neurophysiology and Neuropharmacology of Decisions 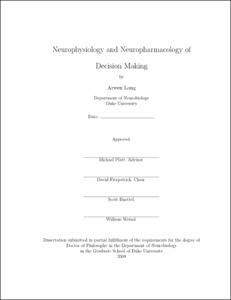 ronal activity. The enormous variety of decisions we make, the intrinsic complexity

of the situations we encounter, and the extraordinary flexibility of our behaviors

suggest the existence of intricate neural mechanisms for negotiating contexts and

making choices. Further evidence for this prediction comes from the behavioral al-

terations observed in illness and after injury. Both clinical and scientific evidence

by neuromodulatory chemicals. This dissertation addresses the function of two puta-

and modulatory effects of serotonin. I found that posterior cingulate neurons respond

choices across contexts in a gambling task. These observations suggest that posterior

cingulate neurons contribute to the detection and integration of salient information

necessary to transform event detection to expressed decisions. I also found that

lowering levels of the neuromodulator serotonin increased the probability of making

risky decisions in both monkeys and mice, suggesting that this neurotransmitter con-

tributes to preference formation across species. These results suggest that posterior

cingulate cortex and serotonin each contribute to decision formation. In addition, the

unique serotonergic pro jections to posterior cingulate cortex, as well as the frequent

orders, suggest that the confluence of cingulate and serotonergic activity may offer

key insights into normal and pathological mechanisms of decision making.