Toxicity to neuroblastoma cells and spheroids of benzylguanidine conjugated to radionuclides with short-range emissions. 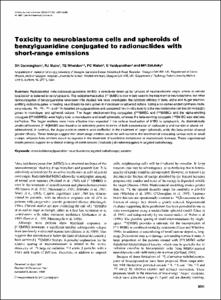 View / Download
1.6 Mb
Date
Authors
Cunningham, SH
Mairs, RJ
Wheldon, TE
Welsh, PC
Vaidyanathan, G
Zalutsky, MR
Repository Usage Stats
148
views
103
downloads
Abstract
Radiolabelled meta-iodobenzylguanidine (MIBG) is selectively taken up by tumours of neuroendocrine origin, where its cellular localization is believed to be cytoplasmic. The radiopharmaceutical [131I]MIBG is now widely used in the treatment of neuroblastoma, but other radioconjugates of benzylguanidine have been little studied. We have investigated the cytotoxic efficacy of beta, alpha and Auger electron-emitting radioconjugates in treating neuroblastoma cells grown in monolayer or spheroid culture. Using a no-carrier-added synthesis route, we produced 123I-, 125I-, 131I- and 211At-labelled benzylguanidines and compared their in vitro toxicity to the neuroblastoma cell line SK-N-BE(2c) grown in monolayer and spheroid culture. The Auger electron-emitting conjugates ([123I]MIBG and [125I]MIBG) and the alpha-emitting conjugate ([211At]MABG) were highly toxic to monolayers and small spheroids, whereas the beta-emitting conjugate [131I]MIBG was relatively ineffective. The Auger emitters were more effective than expected if the cellular localization of MIBG is cytoplasmic. As dosimetrically predicted however, [211At]MABG was found to be extremely potent in terms of both concentration of radioactivity and number of atoms ml(-1) administered. In contrast, the Auger electron emitters were ineffective in the treatment of larger spheroids, while the beta emitter showed greater efficacy. These findings suggest that short-range emitters would be well suited to the treatment of circulating tumour cells or small clumps, whereas beta emitters would be superior in the treatment of subclinical metastases or macroscopic tumours. These experimental results provide support for a clinical strategy of combinations ('cocktails') of radioconjugates in targeted radiotherapy.
Type
Journal article
Subject
3-Iodobenzylguanidine
Antineoplastic Agents
Astatine
Combined Modality Therapy
Guanidines
Humans
Iodine Radioisotopes
Neuroblastoma
Sodium Iodide
Spheroids, Cellular
Tumor Cells, Cultured
Permalink
https://hdl.handle.net/10161/11051
Collections
More Info
Show full item record Professor in Radiology
Dr. Vaidyanathan is a professor in the Department of Radiology.  He is a member of the Nuclear Medicine track of the Medical Physics Graduate Program.  His research involves development of radiopharmaceuticals especially for oncologic applications.  Some of the projects he is involved in are given below. I.          New methods of radiohalogenating antibodies and its variants  a) Development of ne Jonathan Spicehandler, M.D. Distinguished Professor of Neuro Oncology, in the School of Medicine
The overall objective of our laboratory is the development of novel radioactive compounds for improving the diagnosis and treatment of cancer. This work primarily involves radiohalo-genation of biomolecules via site-specific approaches, generally via demetallation reactions. Radionuclides utilized for imaging include I-123, I-124 and F-18, the later two being of particular interest because they can be used for the quantification of biochemical and physiological processes in the living huma
Alphabetical list of authors with Scholars@Duke profiles.