Evidence that the human pathogenic fungus Cryptococcus neoformans var. grubii may have evolved in Africa. 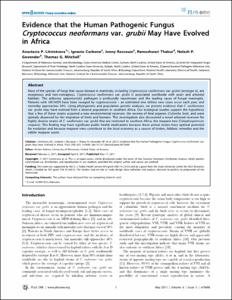 Adjunct Assistant Professor in the Department of Molecular Genetics and Microbiology Associate Professor Emeritus in Molecular Genetics and Microbiology
Among patients with AIDS, leukemia or other cancers, organ or bone marrow transplants, and similar immunocompromising risk factors, the incidence of opportunistic mycoses and the number of different fungal pathogens are increasing dramatically. For many of these fungi, the definition of a species and the recognition of pathogen are highly problematic. Conventional methods of identification are based on morphological and physiological characteristics and are often time-consuming, difficult
Alphabetical list of authors with Scholars@Duke profiles.