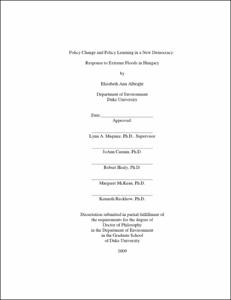 Climate scientists predict increases in frequency and intensity of extreme climatic events over the next century. I used the policy change and policy learning theoretical frameworks--predominantly the advocacy coalition framework (ACF) and the focusing event literature--along with the literature on stakeholder participatory processes, to analyze what policy change occurs and what is learned as a result of experiencing extreme and damaging events. I analyze change in response to catastrophe by examining the response of national and local governments to a series of extreme floods (1998-2002) in a newly democratizing nation, Hungary. I used both qualitative analysis--examination of case studies based on data collected in semi-structured interviews with key informants in the flood and water policy domain--and quantitative analysis--based on a survey of mayors of towns (n=141) in two river basins that had experienced varying degrees of flooding. From these analyses I conclude that the experience of extreme and damaging floods alone was not sufficient to produce policy change and learning. But, a number of factors in concert with the extreme events enabled policy change to occur: (1) The process of democratization allowed alternative voices to be heard in national-level flood policy discussions. (2) A coalition of individuals and organizations espousing an ecological alternative to traditional engineering approaches to flood management that coalesced to press for policy change after the floods occurred. (3) Key policy entrepreneurs, both inside and outside of government, enabled a radical shift in flood management toward the ecological approach. and (4) Scientific information gathered by local environmental activists facilitated in-depth discussions about flood management alternatives. In 2003 Hungary enacted a more comprehensive flood management plan that included economic development and environmental protection goals, but only the flood protection aspects of the plan had been implemented by 2007. At the local level, towns and cities adopted new policies in response to the extreme floods, but these changes focused on emergency response and flood protection policies. These findings suggest that while it may be comparatively easy to adopt new policies, changing long-held beliefs and practices about how rivers and floods should be managed is a much more difficult task.