Genetics and Biomarkers of Osteoarthritis and Joint Hypermobility 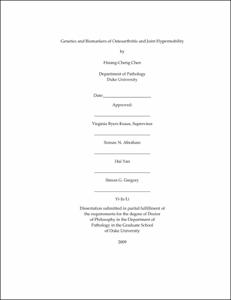 Osteoarthritis (OA) is the most common joint disorder causing chronic disability in the world population. By the year 2030, an estimated one fifth of this population will be affected by OA. Although OA is regarded as a multi-factorial disorder with both environmental and genetic components, the exact pathogenesis remains unknown.

In this study, we hypothesize that biomarkers associated with OA can be used as quantitative traits of OA, and provide enough power to identify new genes or replicate known gene associations for OA. We established an extensive family called the CARRIAGE (CARolinas Region Interaction of Aging, Genes and Environment) family. Then, we measured and analyzed seven OA-related biomarkers (HA, COMP, PIIANP, CPII, C2C, hs-CRP and GSP) in this extensive family to evaluate their association with OA clinical phenotypes. These findings suggest that OA biomarkers can reflect hand OA in this large multigenerational family. Therefore, we performed nonparametric variance components analysis to evaluate heritability for quantitative traits for those biomarkers. Finally, based upon OA biomarkers with high heritability, we performed a genome-wide linkage scan. Our results provide the first evidence of genetic susceptibility loci identified by OA-related biomarkers, indicating several genetic loci potentially contributing to the genetic diversity of OA.