A Study of TGF‐β Signaling in B Lymphocytes and Glioblastoma 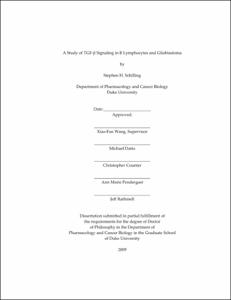 Transforming growth factor–β (TGF–β) signaling regulates a range of processes in a variety of cell types. Consequently, TGF–β plays a complex role in the progression of several types of cancers; it acts as a tumor suppressor in normal cells and early in tumor progression, yet it can promote tumor progression in later stages of cancer.

Among the cancers that TGF–β has been implicated in is glioblastoma multiforme (GBM), the most common primary brain neoplasm and one of the most lethal types of cancer. Because of its high mortality rate and the lack of effective treatments, discovering the molecular mechanisms that underlie GBM formation and growth is of great clinical interest. To this end, we investigated the function of a TGF–β target gene — the putative tumor suppressor N‐Myc downstream‐regulated gene 4 (NDRG4) — in GBM cell viability, proliferation and tumor formation. Contrary to the established roles of other NDRG family members, we found that NDRG4 expression is elevated in GBM and that NDRG4 is required for the survival of established GBM cell lines and primary GBM xenograft cells enriched for highly tumorigenic GBM cancer stem cells. Knockdown of NDRG4 expression results in G1 cell cycle arrest followed by apoptosis that is associated with a decrease in the expression of XIAP and survivin. Finally, knockdown of NDRG4 expression in established GBM cell lines and GBM cancer stem cells results in decreased tumorigenicity following intracranial implantation of these cells into immunocompromised mice. Collectively, these data indicate that NDRG4 does not function as a tumor suppressor like other NDRG family members, but rather it is essential for GBM tumorigenicity and may represent a potential therapeutic target for this devastating disease.

In the second portion of this dissertation, we examine the TGF–β cytostatic signaling pathway in B lymphocytes. TGF–β–induced growth inhibition is the most extensively studied biological response to a TGF–β signal. Although in most cell types this response is mediated by Smad3– dependent regulation of c–Myc, p15<super>Ink4B</super>, and p21<super>Cip1</super> transcription, studies from Smad3 null mice suggest that TGF–β–induced growth inhibition in B lymphocytes occurs regardless of Smad3 status. We prove that this response does indeed occur independently of Smad3 in purified primary B lymphocytes and WEHI–231 cells. Consistent with this, p15<super>Ink4B</super> and p21<super>Cip1</super> are not noticeably induced by TGF–β in these cells, whereas Id3 and cyclin G2 are induced in a Smad3–independent manner. Finally, unlike the MAPK pathways we tested, the BMP–specific Smads 1 and 5 are activated in response to TGF–β in these cells, and this activation is dependent on ALK5 kinase activity. Collectively, these data indicate that TGF–β induces growth inhibition in B lymphocytes through a novel signaling pathway, and Smads 1 and 5 may help mediate this response.