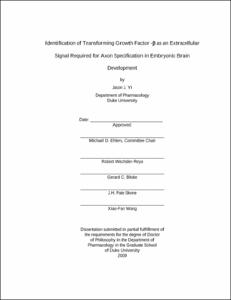 The specification of a single axon and multiple dendrites is the first observable event during neuronal morphogenesis and such structural specialization underlies neural connectivity and nervous system function. Numerous intracellular signaling components that are required for axon specification have been described but how such signaling paradigms are initiated by extracellular factor(s) within the embryonic milieu is poorly understood. Here, I describe how transforming growth factor-&beta; (TGF-&beta;), an embryonic morphogen that directs structural plasticity and growth in various cell types, initiates signaling pathways both in vivo and in vitro to fate naïve neurites into axons. Using conditional knockout strategies, I found that cortical neurons lacking the type II TGF-&beta; receptor (T&beta;R2) fail to initiate axons during development, and interestingly, fail to engage radial migration. In cultured neurons, exogenous TGF-&beta; is sufficient to direct the rapid growth and differentiation of an axon and genetic enhancement of receptor activity promotes the formation of multiple axons. The cellular polarization of receptor activity occurs through the interaction of the type-I TGF-&beta; receptor with Par6, a component of the axon-specifying Par3/Par6 polarity complex. Receptor distribution is restricted to axons, and downstream signaling events required for axon specification are triggered when Par6 is phosphorylated by T&beta;R2. Together, these results indicate that TGF-&beta; is the extrinsic cue for neuronal polarity in vivo and directs neuronal polarity by controlling Par6 activity and cellular migration during axon generation.