Core and region-enriched networks of behaviorally regulated genes and the singing genome. 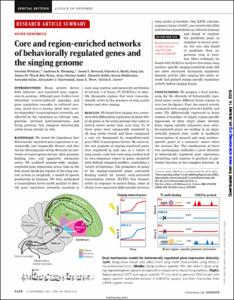 Professor of Neurobiology
The long term goal of our laboratory is to understand at a cellular/molecular level how neuronal activity regulates the formation and maturation of synapses during brain development, and ultimately to use genetic model systems to understand how defects in this developmental process lead to cognitive dysfunction.
Alphabetical list of authors with Scholars@Duke profiles.