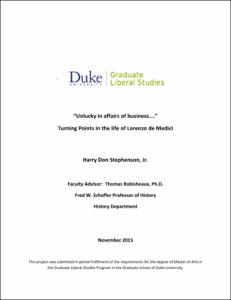 View / Download
1.4 Mb
Date
Author
Stephenson, Harry Don Jr.
Advisor
Robisheaux, Thomas W
Repository Usage Stats
224
views
1,417
downloads
Abstract
The Medici family name is inextricably tied to Florence and the Italian Renaissance. For three hundred and fifty years, through twelve generations, the Medici lived in, work in, and to a considerable degree ruled the city. No Medici name rises higher in recorded history than Lorenzo di Piero de’ Medici. Lorenzo il Magnifico is remembered as a patron of the arts, poet, humanist, diplomat and savior of Florence during the Pazzi War. His legacy as a competent banker, manager and caretaker of the family business empire is sadly much less triumphant. Through the “quirks of genealogical fortune”, including a string of untimely deaths of male members of the Medici, Lorenzo found himself to be the sole owner of the Medici Bank in its sixth decade of business. From the death of his brother Giuliano in 1478, Lorenzo oversaw a long decline of the Bank’s fortune from its zenith in the mid-1460s at the death of his grandfather Cosimo Pater Patriae. Lorenzo would rule the Bank alone for fourteen years until his death in 1492, the bank would fail completely only two years later. Lorenzo was remembered as “unlucky in business affairs” in Niccolo Machiavelli’s History of Florence, but was there more to the collapse than bad luck? Could the Bank have survived with a different level of interest from Lorenzo? Would he have been a better manager with more structured banking and business training? Did Lorenzo’s early death at the age of 43 prevent a restructuring program he had begun? This paper will examine four turning points in Lorenzo’s life and reach for an answer to these questions.
Type
Master's thesis
Department
Graduate Liberal Studies
Subject
Medici Bank, Lorenzo de Medici, Florence,
Permalink
https://hdl.handle.net/10161/11158
Citation
Stephenson, Harry Don Jr. (2015). Unlucky in Affairs of Business - Turning Points in the life of Lorenzo de Medici. Master's thesis, Duke University. Retrieved from https://hdl.handle.net/10161/11158.
Collections
More Info
Show full item record